Trevor and Michael experience a rough patch in their friendship. 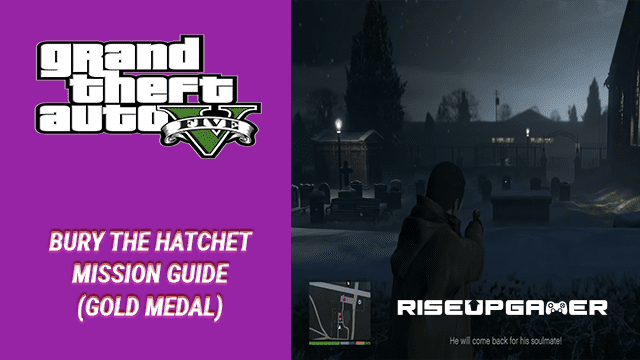 Trevor goes to Michael’s house and tries to talk him into busting their friend Brad out of prison. Initially a friendly scene, Trevor slowly pieces some things together and leaves infuriated.

This mission will involve a bit of driving and flying with a large side of action. Here is everything you need to know about the Bury The Hatchet mission and how to get its Gold Medal in GTA 5.

Trevor meets up with Michael in his home. Initially they begin a friendly conversation that devolves into a loud screaming argument. Trevor will end their talk by running off.

You will be switching between Trevor and Michael. Trevor will steal Michael’s car and head to the Sandy Shores Airfield while Michael can grab a motorcycle in his garage and head to the Los Santos International Airport.

Michael will board a plane at the airport while being tailed by some of Wei Cheng’s men. He will fly to Ludendorff via a cutscene.

Once he arrives at the airfield, Trevor will drive his own plane to Ludendorff. While controlling Trevor, you will have to fly the plane offscreen.

The scene cuts to Trevor at the Ludendorff Cemetery trying to dig up the corpse of “Michael Townley”. You will then switch to Michael in a car driving his way to the Cemetery as well.

During this drive, you will hear some details about how Michael got out of prison and what he tells his wife Amanda.

Once you are close, get out of the car and run to the grave in the cemetery. You will witness Trevor digging out the grave. This erupts into a large fight between Trevor and Michael about the truth.

However, they will be interrupted by the arrival of some of Wei Cheng’s men. Trevor will run and you will be in control of Michael. There will be a lot of enemies that appear in the cemetery.

Make sure to use Michael’s special power to get 20 headshots and 80% accuracy to get the Gold Medal for this mission.

Run back to your car, which will unfortunately break down. Michael will then be cornered by more armed men and be forced to give up.

You will then switch to Trevor on the plane flying back to the Sandy Shores Airfield.

During this time, he will get a call from Wei Cheng saying that they have Michael hostage. Trevor fails to care about it though and continues on his way. The mission ends once you arrive at the airfield.