Be the wind and steal that van without anyone knowing! 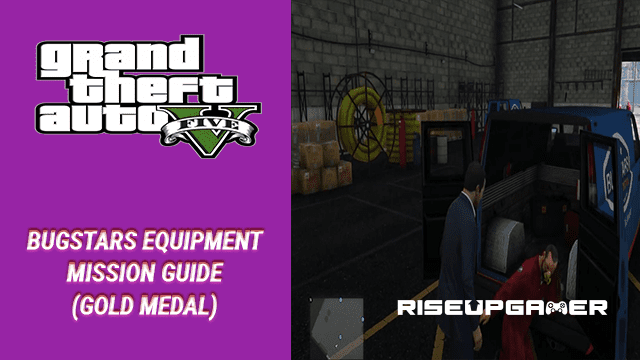 Michael is tasked to steal one of the Bugstars vans at the company’s very own warehouse in Port of Lost Santos in preparation for their upcoming big heist. No big deal for a man of crime such as him.

In this article, we will show you how to finish the Bugstars Equipment Mission and how to get its Gold Completion.

Playing as Michael, make your way toward the Bugstars warehouse in the Port of Los Santos. Just follow the quest markers on your map to know where precisely you should be.

While it is much easier to just bum rush your way to getting the van using the front entrance, do not do that if you want to get the Gold Medal completion.

Instead, go to the back of the warehouse and use the rear entrances.

You should see a conveniently parked van from the rear entrance. That said, there is a driver near it that you must first deal with.

Sneak behind him to go for a stealth kill or simply shoot him down using a suppressed pistol.

Once that’s done, go inside the van and secretly drive out through the rear entrance. Be careful not to back up to much as you might fall on the water.

Now exit the warehouse without anyone seeing you.

Once in the clear, drive the van back to the marked location on the map.

The mission should immediately end after driving to the marked point.

Sneaky Pest: steal the Bugstars van without anyone seeing you.

This is why you should head approach the mission from the rear entrance of the warehouse. There, all you have to deal with is the lone driver nearby the van.

There you have it! This is a straight-up stealth mission.

Do what we told you above and you should receive the gold medal without much trouble.