Michael, Franklin and Trevor try to rob an armored car. 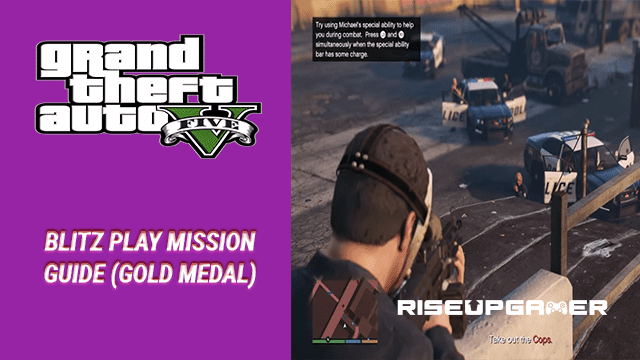 The moment of truth has arrived. After some careful preparations, the trio is finally ready to pull off the Blitz Play. They will be stopping and breaking into an armored truck to steal their score.

This mission will feature a little bit of driving and a lot of combat so be prepared for some action.

Here is everything you need to know about the Blitz Play mission and how to get its Gold Medal in GTA 5.

The mission starts with Michael, Franklin and Trevor meeting up at the FIB Warehouse and talking about the details of the heist.

Once that is over, you will have to take control of Michael and drive the Trash Truck to the designated location in Cypress Flats.

After a signal from Trevor, you will have to use the Trash Truck to block both lanes of the road to stop the armored car.

While the armored car is stopped, you will take control of Franklin in the Tow Truck. Use it to ram into the side of the security truck.

This will turn the armored car onto its side and you can plant some sticky bombs in it’s rear doors.

Michael will grab what they need from the inside of the vehicle. What follows will be a large firefight between the trio and a lot of LSPD cops. You will gain a level four wanted level.

You can switch between all three characters during this section.

Michael will be extremely useful during the firefight because of his special power. Use this to get the headshots and accuracy you need to get the Gold Medal.

Trevor will be equipped with a rocket launcher and a sniper rifle when you switch to him. You can use the sniper rifle to clear other snipers on neighboring rooftops that are aiming at Michael and Franklin.

Continue fighting off the waves of cops that arrive.

As the fighting goes on, a helicopter will eventually appear. Use Trevor’s Rocket Launcher to take it out.

This will cause the cops to stop arriving and the trio takes this chance to get on the move.

You’ll take control of Franklin and drive the Trash Truck to the getaway location on your map.

Once you are there, place some sticky bombs on the truck and destroy it.

You will then switch to Michael who is on his way to Devin Weston’s house. There will be a cutscene between the two of them with Weston convincing Michael to do another job and the mission ends.