See how Kratos and Faye met in God of War Ragnarok! 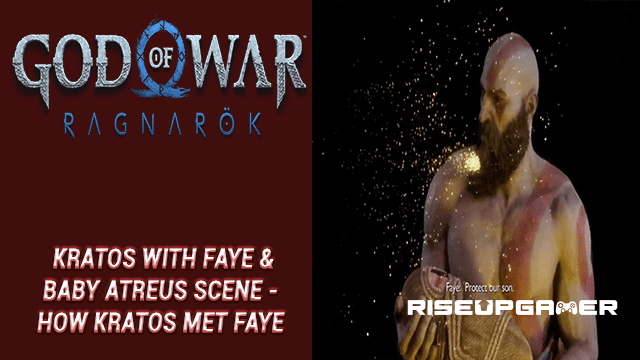 Faye is Kratos’ deceased second wife and the mother of Atreus.

Sometimes, she visits Kratos in his dreams to give him gentle reminders in times where he is emotionally vulnerable.

In this particular sequence, she is featured in a flashback to simpler times where Atreus was still a small infant.

This is mostly a playable cutscene taking place in Kratos’ dreams and all you have to do is follow Faye along the trail and paddle across the river.

Find out more details about Faye and Kratos down below!

The scene will begin with Kratos retiring to his room and going to bed.

Faye will be shown in his dreams again, just like in previous parts of the game.

It is a flashback into their past, evident with her holding onto what seems to be an infant Atreus. You follow her as she starts walking towards a pier, where she and Kratos will get on a canoe.

Kratos paddles them forward while Faye lovingly talks to their infant son. She will tell him about how they live in the Wildwoods, the most beautiful forest in Midgard. Where it is safe and full of wild game.

She recounts how heated her first encounter with Kratos was and how they almost tore each other apart.

Eventually, she asks Kratos to say something to their child. He replies that their child is better off knowing nothing and Faye begins a discussion on how they are not their failures and that they can be better.

They eventually paddle into a dark cave. Faye begins to remind Kratos that Atreus is their future and that he should keep him safe. As she fades away, he tells Kratos to protect their son.

Kratos wakes up from his dream and is now more determined than ever to protect Atreus.