Go on another adventure with Kratos and Atreus in God of War Ragnarok! 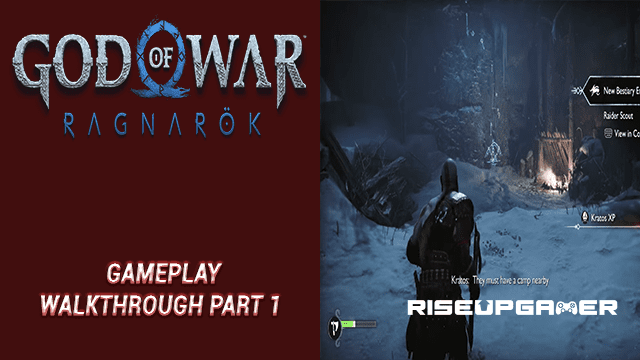 God of War Ragnarok takes place directly after the events of the reboot game.

This first chapter will heavily focus on the stories of the game and as such will have mostly tutorial or simple gameplay sections.

You will have to traverse through the snowy trails brought on by Fimbulwinter while having to engage in battle with Freya and a number of Raiders.

Check the article below for a walkthrough for the first part of God of War Ragnarok!

You will begin the game with Kratos in a cave. Atreus will return from hunting and you will begin a playable segment where you have to ride your sled back to your home.

During this time, Freya will suddenly attack the duo. There will be many quick time events you have to deal with. After succeeding to fend her off, you will eventually return to the safety of your home.

To progress the story, approach Fenrir at the small shed where Atreus will be talking to Fenrir. Kratos will leave them alone and go to sleep inside their house.

This next section will consist of following Faye. This level is very straightforward as all you have to do is talk and follow her.

Eventually Kratos will wake up from the dream and find out that Atreus never entered the house.

Head to the wolves’ den at the bottom of the house. Atreus’ leads to a small crack you have to pass through. You will have to break it with your axe first.

Follow the tracks through the cave and into the Upper Wildwoods. You will eventually encounter enemies where the tracks stop.

After you’ve dispatched the Raiders, you can continue on by moving the tree blocking the path. Continue following the main path until you encounter enemies again.

This time, you can hold the triangle button to charge up your axe with ice to power up your next attacks. This area will feature waves of enemies, so make sure to stay on your toes.

If you ever have difficulties figuring out where to go, there will be some patterns written on walls that will guide you to where you need to go.

These will lead you into some caves where there are more Raiders. There will be some enemies with ranged slings so do not forget to block with your shield every now and again.

The way out will once again be emphasized by the runes adorning the walls. Stepping outside will begin a boss fight with Bjorn, the bear.

Bjorn will have a variety of attacks like ones with a yellow ring that will break Kratos’s guard. Attacks with red rings are completely unblockable, so it is best to keep moving during this boss battle.

At one point in the fight, Kratos will unlock his rage mode. This will cause him to fight with his fists instead of his axe. This mode greatly increases the damage that Kratos inflicts.

Once you’ve defeated the bear, it will transform into Atreus. There will be a cutscene where Atreus explains that he does not remember anything and that he still wants answers.

Once Kratos and Atreus finish exchanging words, the chapter will end.

God Of War Ragnarok: How To Open All Nornir Chest "Aurvangar Wetlands" Locations
Read next >
God of War Ragnarok