Solve the puzzle to reveal the domain entrance!

Genshin Impact has recently received a 3.1 update called “King Deshret and the Three Magi” that adds plenty of new content in the Sumeru region. It adds new areas, weapons, characters and quests for players to enjoy

While exploring the new desert area, you will come across a new domain called the Garden of Endless Pillars which can be found west of The Dunes of Carouses.To access this domain, you will need to solve a puzzle by lighting up various totems in the correct order.

This guide will tell you how to solve the Totem puzzle in the Garden of Endless Pillars.

First, you need to head over to the Garden of Endless Pillars found at the above location on the map.

Once you reach there, open the party menu and switch your main character to pyro one such as  Amber.

You will notice that every Totem in the area has some flowers next to it starting from zero to a maximum of four. The Totems need to be light depending on the number of flowers it has beside them.

First, you need to shoot the Totem with zero flowers on your right.

Proceed further ahead and shoot the next Totem with 1 flower in the right corner.

You will find the next Totem with 2 flowers right beside the wall.

In the middle of the map, you will find the Totem surrounded by 3 flowers.

Finally, the last Totem with 4 flowers can be found north of the large stone pillar in the middle.

This will solve the Totem puzzle and reveal the entrance to access the domain which you can unlock by interacting with it. It will also spawn an Exquisite chest containing some value rewards.

That’s it, now go ahead and solve the Totem puzzle to reveal the entrance of the Domain! 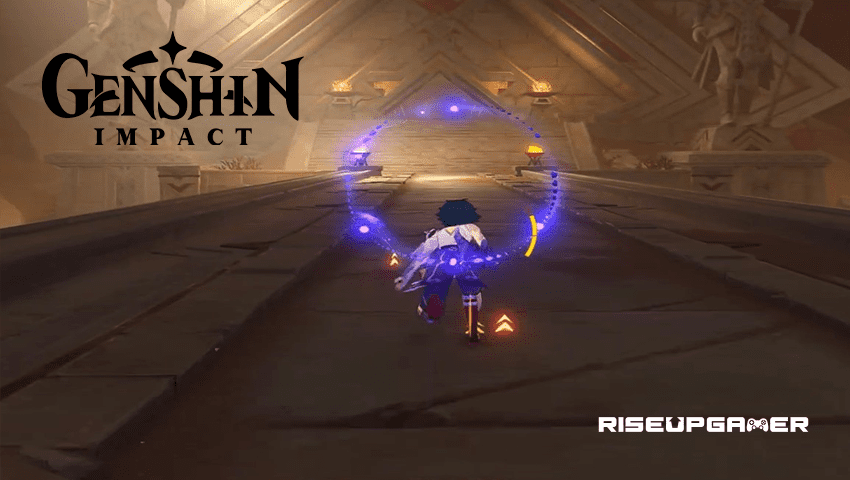