Time find all luxurious chests in The Chasm. 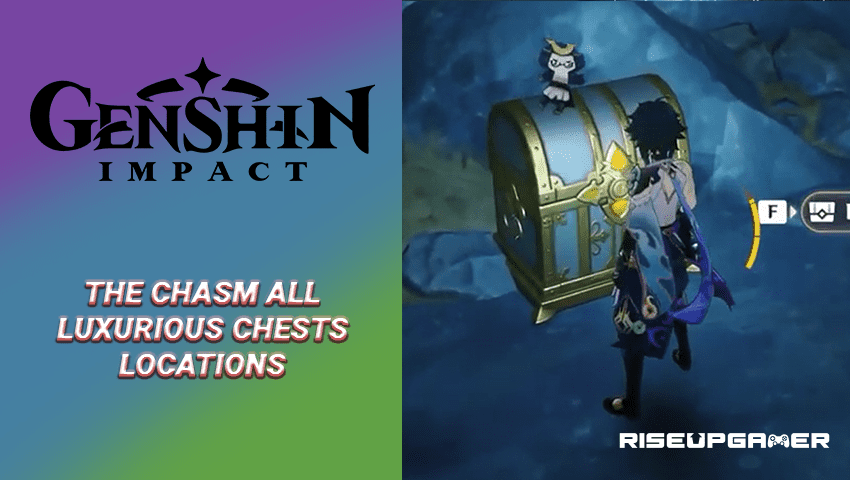 The Chasm is a large area that covers many smaller areas. In this place, you can find many collectible items, upgrade materials, even luxurious chests. As you continue to progress into the game, you unlock some areas with extra chests.

This guide will show you all luxurious chest locations in The Chasm area in Genshin Impact.

The first luxurious chest will require you to get on top of a rock where the location can be found on the map. Once you get to the marked area, you will see some enemies that you need to kill.

Once you have killed them, look up in the air where you will see circles in the sky that can boost your gliding.

Get to the giant rock to begin your boost and land on the second rock in front.

Enter the cave that has been opened after the cut scene, follow the path until you reach a door on your right side, and a big hole on your left side.

Jump inside the hole and at the end of the trail, you will see a luxurious chest.

Your quest begins in the middle of The Chasm’s Maw. There you will meet with Wang, who will give you objectives and will also lead you towards the Luxurious Chest.

He will ask you to look for offerings to place before the memorial. They are stranded all over The Chasm’s Maw area.

Once all the items have been gathered, go to the Memorial Stone, where it’s shown on the map, and offer the items to it. This will open up a secret cave that you can enter.

Enter the cave and drop down, on the right side you will see a grave with some purple light shining around it, and a luxurious chest that you can loot and obtain your rewards.

Just north of The Chasm: Main Mining Area, you will go close to the waterfall right where it is marked on the image. There you will see a hole in the wall.

Interact with the hole in the wall, and you will enter a secret room that has a Luxurious chest inside.

In the middle of the Underground Waterway, get close to the waterfall and you will notice that the area is a giant circle.

You will see some stones that can launch you up in the air. Use them to get to the other side of the waterfall.

Once you have made it to the other side of the waterfall, you will see a green pillar that can be activated by dashing into it.

Dashing into the pillar will occur a strong wind that can blow you up.

Jump into the wind and ascent up until you reach the top. There on the side of the wall, you will find a luxurious chest.

For this luxurious chest, you will need to begin the Heavenly Stone’s Debris Chest, where it will end up firing a cannon towards a wall and opening up a hidden space.

This quest is part of the storyline of the game.

Once you have made it this far into the quest, shoot the wall and a cut scene will appear on how everyone cheers that you’ve found the hidden entrance.

At the beginning of the entrance, you will see the luxurious chest.

This luxurious chest can be found on top of the shiny tree that is located south on the map.

To get to this area, firstly you must complete the Dainsleif chasm quest.

Once the quest has been completed, head to the teleport that is located at the Nameless Ruins and climb the wall to get to the middle of the area.

When you get to the middle of the room, descend on a small rock where you will see a luxurious chest placed right next to the wall.