Genshin Impact: On All Things Meditated 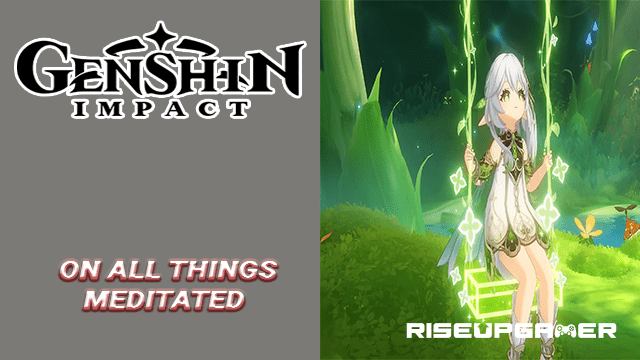 Alongside Genshin Impact’s Version 3.2 update is the introduction of the loveable Dendro Archon, Nahida. However, what made gamers extra excited about her is her incredibly unique Passive ability, the On All Things Meditated. This Passive ability essentially gives her Elemental Skill more utility than just being something that wipes out several enemies in combat.

In this article, we will be diving a bit more into Nahida’s unique Passive, On All Things Meditated.

On All Things Meditated – Genshin Impact

Gameplay footage shows that Nahida’s Passive ability makes her Elemental Skill unlike anything else seen before in the popular Gacha open-world game.

By default, when players use her Elemental Skill, Nahida will enter Aiming Mode, which will allow players to select a limited number of opponents within a set AoE.

During this time, Nahida’s resistance to interruption will significantly be increased. Aiming Mode will last up to 5 seconds and can target up to 8 opponents.

When released, the skill will deal Dendro damage to the targeted opponents and then mark them with the ‘Seed of Skandha.’

The fact that Nahida can go to Aiming Mode despite being a Non-Bow character is unusual already, but her skill proved to be even more unique.

Her Passive ability gives her two extra unique traits. First, is reading NPC dialogue by reading their minds and the other is collecting harvestable items, which we will take a closer look at a different guide.

Genshin Impact: How To Get Mirror Of Mushin

When Nahida aims her Elemental Skill at an NPC, a smiley face animation will show up then activating it soon after will make her read the NPC’s mind.

This opens up new possibilities not seen before in Genshin Impact. Will these lead to new side quests, or at the very least, unique dialogs from the many NPCs around the open world?

With all that being said, Nahida is truly shaping up to be Genshin Impact’s most unique character.

How to Get no Face: Roblox
Borut Udovic
GTA 5 Online | How To Spin The Lucky Wheel More Than Once Per Day
Borut Udovic
Mount & Blade II – Bannerlord: Steam Deck Support
Brandon
Elden Ring: Chain Armor Set Location | Where To Get
Riseupgamer
Undecember: Is it Better than Torchlight Infinite? Find Out!
Borut Udovic
Latest