Here you can check Lost in the Sands, the first quest of the Golden Slumber chain in Sumeru for Genshin Impact! 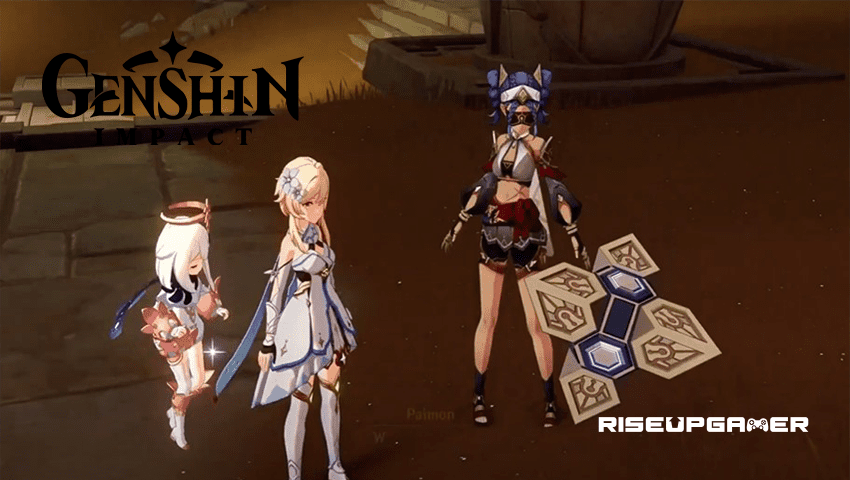 Genshin Impact 3.1 update is finally here, and it comes with a new desert area, where players are going to explore new characters, areas, quests, and a lot of rewards. As you start the questline, Lost in The Sands is the first quest that you have to pass, and we are going to help you out pass through it.

In this guide, we will tell you all you need to complete Lost in the Sands Quest in Genshin Impact!

At the beginning, before starting the quest, you must unlock it in Aaru Village. Make your way to the village, and then look for Bonifaz who wants to talk with you.

On the map below you can find the location of Bonifaz in Aaru Village.

Once you talk to Bonifaz, he will unlock the quests, and the Golder Slumber will start.

2.Follow the Footprints and search for the Archeology team

Once the quest starts, you need to follow the footprints on the main road that goes to Abdju Road.

Keep walking straight until you come to the Teleport Waypoint in front of a big cave. At this point, you will update your task, and then need to proceed onward and search for the archeology team inside the cave.

Follow the road going underground where you will connect to the Adju Road. In the end, you will come to a big revealed hole. Jump down and there you will find the archeology team.

3.Talk to the Three People

After you come down the Abdju Pit, you have to talk with the three unknown people who fell into the hole.

When you are done with the third person from the camp, you will get a notification to talk with another, fourth person there which is in front of the passage going to the gate of the cave.

After the talk, you have to go back to the middle of the camp and look for the objective in this area. You will meet the others with Jeht. He will explain the situation to the three of them.

4. Go to the Area near the Ruins together with Tirzad

You have to make your way to the entrance of the ruin where you talked with the fourth person earlier.

Here you will have to talk with Jeht, and after that ruin will be opened.

5. Explore up ahead through the long corridor

Once the big triangle gate is opened, you will have to continue following the path and reach the marked location that you will get on your map.

Walk across the platform, and at the end, you will come to another triangle gate that is closed. You have to explore the area in front of the gate where you will find a stone cube that needs to be activated in order to open the gate.

In the next level of the ruin, you will come to an area where you will encounter a few enemies, and then there will be another locked gate that has to be opened in the same way through the stone cube.

Open the gate, and continue exploring through the ruin.

Just follow the path which is the only one that will bring you to another open area where you will find a treasure chest on the entrance and two monuments on the back.

Head to the left corner of the hall where you will find a stone platform which is an elevator that will bring you down to the lower level of the ruin.

6. Light the 4 Torches in Abdju Pit

Once you come to the lower level in the Abdju Pit, you need to fire all the torches in the room to unlock the Cube Mechanism.

To do this, you have to use Electro and shoot the Tri-Yana Seed.

After the torches, you will unlock the chest in the middle, and then, have to climb on the platform on the left side of the room where have to interact with the stone cube and get teleported on the other side of the wall.

Once you are on the other side, you have to continue exploring the area. Keep following the path and then you will suddenly meet with the others.

7. Continue investing the Ruins with Jeht

In the room where you are, there will be a platform that will bring you to the upper level of the ruin. In this part, you will come to a strange triangle object in front of the gate.

Once you interact with it, you will have to report your findings to Jebrael.

From here, you have to go back to the lower level by using the elevator platform.

There will be Jebrael waiting for you to report what you have found.

Also, talk with Tirzad who is going to reveal the new gadget for you, the Scarlet Sand State.

Now, you will be able to go and open the locked gate.

Go back to the upper level and interact with the object in front of the gate. From here, you have to keep going and look for an exit.

8. Continue exploring and look for an exit

Keep following the path that will bring you to a room with a lighting platform on the ground. Step on it and you will activate the laser stone.

You need to get the Forged Primal Light and place it on the Replicator Keystone.

You have to relay the Primal Beam to the mechanism on the left to open the door.

It will automatically link to the mechanism and you will get the third Sacred Seal in the next room.

Rotate the two cells until they link to the right mechanism and then you will be able to unclock the gate.

Once the door is open, you can continue to the next door where you will have to defeat a few Primal Constructs.

After that, you can unlock the next door by activating the book in front of it.

This is actually the last door from the ruin, and after you pass through it, you will be able to exit the ruin.