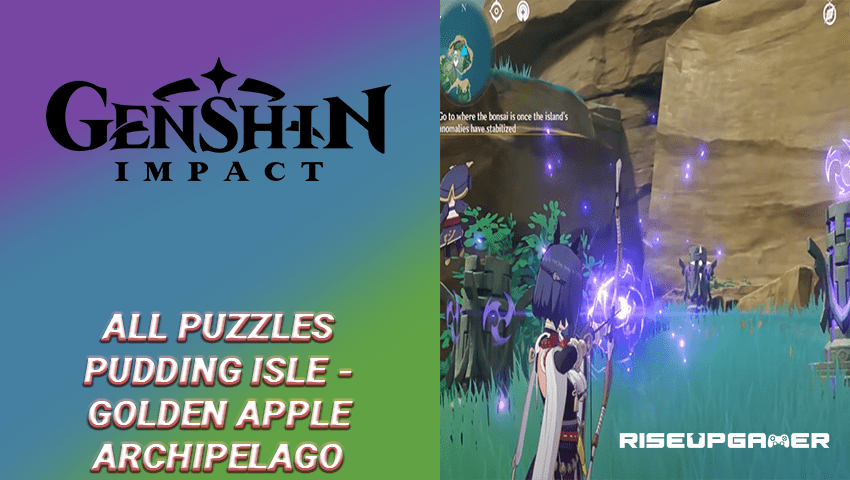 The new version 2.8 brought plenty of puzzles that need to be solved on the Isles from the new Golden Apple Archipelago map. We gathered all the puzzles from the Pudding Isle for you in order to solve them easily.

This guide will show you All Puzzles at Pudding Isle from Golden Apple Archipelago in Genshin Impact!

Use the northwestern Teleport Waypoint on Pudding Isle to come to the bonsai. Rearrange the Bonsai and select the rocks as followed:

To find this totem puzzle, you need to go to the northeast of the eastern Pudding Isle Teleport Waypoints.

There is a specific order that you can attack all the totems. You need an Electro character for your party.

Activate the Electro Monuments according to the order of how the Electro Seelie is flying on the wall.

All you need to do is to hit all the totems starting from the middle one. Once they are all activated, you can open the chest and get valuable rewards.

Make your way southeast from the Teleport Waypoint and you will get to this monument. There you will find Hilichurls and a Cryo Abyss Mage. Use your Anemo character and hit all of the totems to activate them.

The Geo Totems can only be activated if you’ve already solved the Electro Totems on Pudding Isle.

Go back to the Bonsai and rearrange it to the following:

You can set the left site as Hoverlight Rocks if you want to look at the Electro Seelie.

The Totems can be found directly southwest of the Teleport Waypoint on Pudding Isle. To solve the Geo Totem Puzzle, you will need to activate the totems according to the order of how the Electro Seelie is flying on the wall on the Northeast side of the island.