Bring the Titan to its knees using this guide! 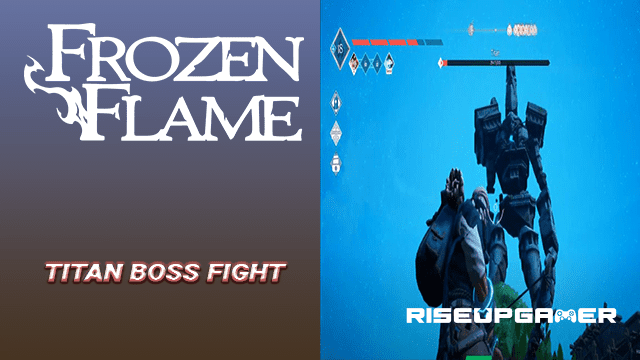 The Titan is a boss encounter like no other in Frozen Flame. Its scale alone puts other boss fights in the game to shame. Unlike previous battles, the arena wherein you battle the titan is absolutely massive – as one would expect considering the boss’ name. While truly intimidating, defeating the Titan shouldn’t be that much of a problem at all, assuming that you know what to do.

In this guide, we will be showing you how to defeat the Titan in Frozen Flame. Follow the steps we will be sharing below and soon enough you should see that gargantuan being fall.

The Titan is very slow. You can easily outrun it and dodge its attacks by using sprint.

That said, absorbing one of its attacks should slice a hefty chunk out of your health bar.

From time to time, the Titan will spawn blue crystals that would shoot out Yellow beams toward you.

While this too can be easily avoided, it can sometimes catch you off guard.

Adding to your pain are the several enemies out to chase you. They aren’t that much of a threat; however, they are just completely bothersome.

Now that you are aware of its attacks, it’s time that we start discussing how to actually beat it.

In boss battles within large arenas, gamers should already expect that the environment should play a huge role in the encounter, and this one is no different.

Scattered within the boss arena are runes that you can activate to significantly damage the Titan. Do not bother taking it head-on as your attacks would only be minuscule. Focus on finding the runes.

The first rune you should activate is located to your right facing the Titan. Go up the stairs, and then go left to the top.

Now jump over the broken barricade and move forward. Soon enough, you should see the first rune.

Activate it to put the Titan to its knees and expose its weaknesses. Take time to shoot the red glowing crystals on its body while moving to the next rune to deal sizeable damage.

Frozen Flame: How To Defeat A Stone Elemental

The next rune is located on the opposite side of the first one. Just jump back across the broken barricade and move forward. Activate it to deal another huge blow to the Titan.

Now make your way to the other side of the arena to get to the next couple of runes.

Much like before, head up the stairs opposite the first rune and continue following its path. You should find the third rune there. Again, activate it to deal significant damage to the Titan.

The fourth rune is located just near the previous one. Just move a bit forward and you should already see it.

By the time you activate the fourth rune, the Titan’s health bar should already fall to a fourth of its actual health. You now only need to chip at it to finally take him down.

Focus your attacks on the glowing crystals embedded in the Titan.

It may take a bit of time but the Titan should fall easily using these simple steps.

After the Titan falls, go to the altar and open the treasure chest to claim your reward.

This should give you 25 Sky Crystals, a Portal Core, and a Deconstructor Blueprint.

There you have it! The Titan is down for the count! While you can take the boss head-on, it is best that you just take advantage of the arena itself and hunt down the runes scattered around it.