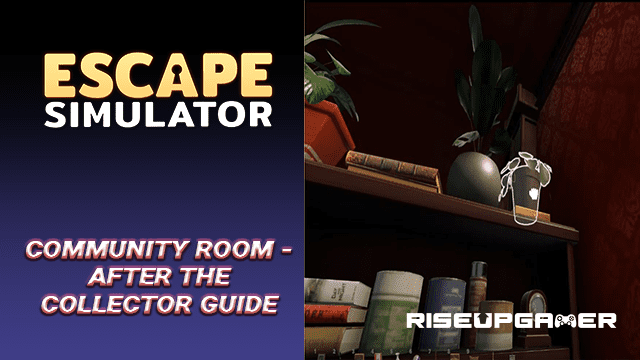 Having trouble solving some of the community-created rooms in Escape Simulator? We couldn’t blame you. After all, the creativity shown with each level created by the community members of the game itself has truly been superb – remarkable, to say the least. Do not perish, though, we are here to help you through some of them.

In this guide, we will be showing you how to conquer the community room titled: After the Collector.

Firstly, you can get access to the After the Collector level only by heading to Escape Simulator’s Community Rooms at the pick level section found on the main menu.

Browse through the many impressive community rooms or simply search for them at the search bar provided at the top. Click on the After the Collector level and proceed to start.

The level starts you off in a luxurious room in front of a TV.

Get a bearing on your surroundings by looking around.

Behind you from when the level started and on top of a table, is a notepad.

Reading it would give you a bit of backstory regarding the level itself.

The next thing you need to do is to look below the sofa directly in front of you after picking up the notepad. You should see there a Golden Sword. Pick it up.

After that, inspect the pillows resting on the sofa. One of them should strangely have a ‘bird’ text written on it.

Take that specific pillow with you and leave the other two behind.

Go back in front of the TV. Check the drawers on the table where it is placed.

Grab the Painted Wooden Block and the Vinyl. They are both found in the bottom drawers. Perhaps we will be using them later on.

Then head to the side table beside the bookshelf and in front of the window.

Check its drawer on the right and grab the red pen that is found alongside three differently-colored ties.

On the back of the aquarium resting on top of the side table, you are currently on is the text ‘Time’. Take note of that there.

The next thing you should focus on is the large Grandmother clock and the small table clock just beside it found on the bookshelf. As you may notice, they are stating different times.

Open the Grandmother’s clock and adjust it to whatever the small clock shows. After successfully doing so, it should sound loud and unlock the drawer on the side table next to it on the left.

Take the Golden Desk key from the unlocked side table drawer. You’d surely need that later on.

Before figuring out where we would be using the golden key, pay attention to the round side table beside the door that has a vinyl record player.

Place the vinyl record you took just a while ago to open its drawer. It should show Joffrey’s Eye. Take it with you.

Don’t leave the vinyl record player yet. On its backside, you should see a peculiar code.

It is a series of directions. Take note of it as you would be using it later on.

Now go back to the table where you found the golden key and inspect the vase on top of it. Rotate it to its bottom and you should see a roman numeral ‘IX’. Take note of that as well.

Now go to the study table on the other side of the room. Use the golden key you found in the bottom right drawer of the desk.

There you will find several books and another Painted Wooden Block. Take the wooden block with you and the book that shows Morse code equivalents.

After that, inspect the handwritten note on the very center of the desk and the post-it note just near it if you want. However, definitely take the black pen beside the note.

After reading through the notes that give you more backstory about the room, inspect the family picture found on the upper left corner of the desk. Behind it is the Roman numeral ‘II’. Keep that in mind.

The next thing you would want to do is to pay close attention to the large portrait of the family patriarch on the right side of the desk.

At the bottom corner right is a series of numbers that you should take note of. They are ‘806612′.

To the left of the large portrait is another bookshelf.

On top of it on the corner right is a plant that you can grab. Take it and put it down to gain access to the next Painted Wooden Block that is just below it.

Go back to the large desk behind you and inspect the world map poster at the very center of it. Behind the poster are alphabet equivalents for certain numbers.

With the alphabet equivalents in your possession, you may now decipher the code you just found on the large portrait. 806612 = ‘PILLOW’.

Now turn your attention to the pillow you took at the beginning of the level, the one with the word ‘Bird’ written on it.

Decoding ‘Bird’ using the very same code equivalents would result in a number combination of ‘7094′.

Use that very code on the locked small briefcase found on the desk. Inside it is an Odd Key.

This time, go back to the long table and move the chairs near the bookshelf. You should notice some Morse code inscribed on the side of the table.

Decoding it using the book about Morse code you just took a while ago on one of the desk’s drawers would result in the word: ‘Grave.’

Now go back to the bookshelf near the large portrait.

There, on the bookshelf, you should see another locked briefcase. Use the code Grave on it and get the 4th Painted Wooden Block.

The next thing you should do is head over to the bookshelf beside the Grandmother’s clock. Put the golden sword you took at the start of the level on the pedestal on one of the shelves.

This should give you access to the door behind the bookshelf itself. Use the Odd key to open it.

Immediately to the left after entering the secret room is another bookshelf.

Check the drawers at the very bottom of it. You should see a book there that has the Roman numeral ‘II’ written on it.

Now, scoot over the stone vases on the shelf until you can interact with the bird statue behind them. Take it with you.

This time, pay attention to the skeleton sitting in the corner of the room. Take his top hat and look under it. You should see the Roman numeral ‘VII.’

Before leaving the skeleton behind, take the pen on his right – you should now have three different kinds of pen.

Go back to the desk and place the three pens you found scattered around the level on the pen stand in the center of the desk.

This should unlock the window at the middle top of the desk. Get the 5th Painted Wooden Block there.

Turn around and face the bookshelf. There you should see a golden pedestal where you can put the bird statue you got from the secret room. Place it on the pedestal.

Now pay close attention to the briefcase in the corner of the secret room. It has a peculiar riddle written on top of it.

Use the code ‘SKULL’ to unlock the briefcase and receive the 8th Painted Wooden Block.

Look now at the closet and peek through its openings. You should see the phrase ‘Face the Music.’ Keep that in mind for now.

The next thing you should do is to compile all the objects you found that have a Roman numeral written on them. You should notice that each has its own color.

Take them all with you to the bookshelf where you put the bird statue just a while ago. At the bottom-left are multi-colored blocks.

Rotate them to correspond to the Roman numeral and the colors from the various objects you found throughout the level.

The red one is located on the back side of the TV from when you started the level. It has the Roman numeral ‘V.’

After putting the correct color and number combination, a drawer next to it should open up that would give you the ninth and final Painted Wooden Block.

With the nine wooden blocks with you, go back to the secret room. To the right and on top of a side table is an empty portrait.

Put the wooden blocks there and construct a skull.

This should open the small treasure chest on the side table. It contains the other Joffrey’s eye. Take it with you.

Now go back to the desk. Put the two Joffrey’s eyes on the skull on the left side of the desk.

This should open the drawer just below it giving you access to the book with some numbers on the back of it.

With the book with you, go back to the vinyl record player and solve the code on its back side.

Starting from the star in the middle of the numbers on the book, move to the directions pointed by the code written on the back of the player. Doing so should point you to the number combination: ‘75791.’

With the code in hand, go back to the closet in the secret room. Use the code 75791 on the locking mechanism.

This should unlock the closet and give you access to a pair of Daisy’s eyes. They are glowing eyes so you should notice them very easily.

Beside the eyes is the Front Door Key. Do not forget to pick them all up.

Now you are done! Simply use the key to the front door and you are now finally out of there! Good job! 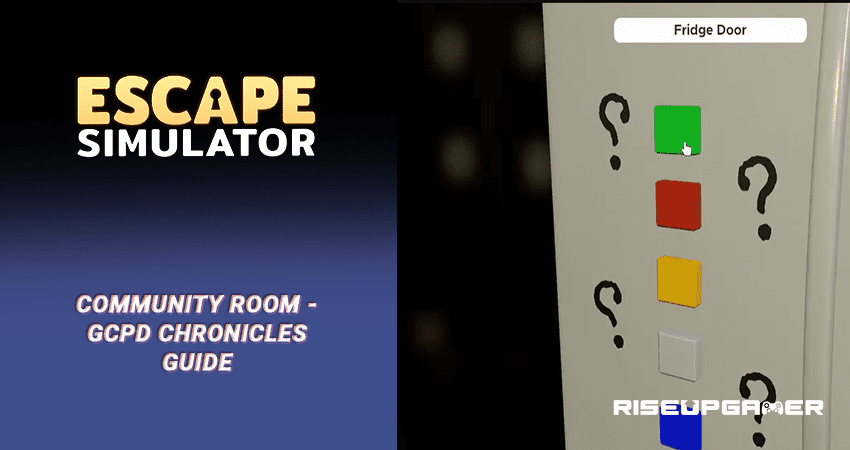