Check out this guide to see how you can get the Triple Kills Gold Trophy for Diving Knockout! 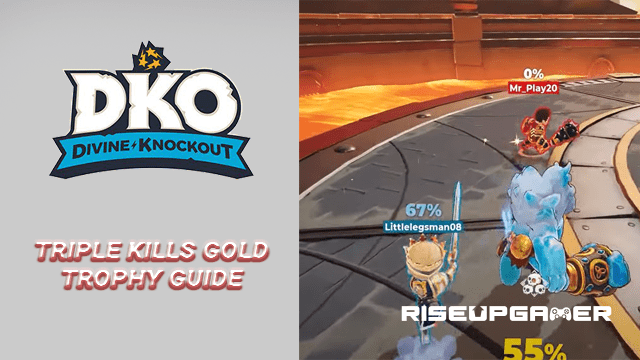 Divine Knockout is an amazing arena fighting multiplayer game where you get to choose different characters that have great abilities. All of these characters are balanced and will surely give you a great time playing the game. Inside Diving Knockout, you have trophies that can help you earn more rewards and get you some cool customizable items for some of your favorite characters.

This guide will show you how you can get the Triple Kills Gold Trophy Guide in Divine Knockout.

The Triple Kills Gold trophy will require you to perform a total of 30 Triple Kills. You normally won’t be able to do this in one game, that’s why the game has offered you an infinite amount of games that you can play in order to get those triple kills.

There are many characters that you can use for this trophy, but the best one out there is going to be Ymir.

If you don’t have Ymir, you can always use Hercules or King Arthur. Those two heroes are not that difficult to play and will still pack a punch in the enemy’s borders.

Once you make your way in-game, you want to focus mainly on your triangle button which makes Tmir smash his club into the ground and knock away his enemies.

The enemies will fly away from Ymir and potentially drop from the battlefield, allowing you to score Triple Kills faster.

And that’s about it, you just need to spend some time while fighting and make sure to try and gather all enemies in one place and just knock them far away from the ring as possible just so they don’t manage to dash back in.

We hope this guide helped you ease your journey for the Triple Kills Gold trophy in Divine Knockout. Best of luck now!