By Borut Udovic
Monk is one of the most popular classes in Diablo Immortal and this guide will tell you all you need to know about the Leveling and the Build for Monk. 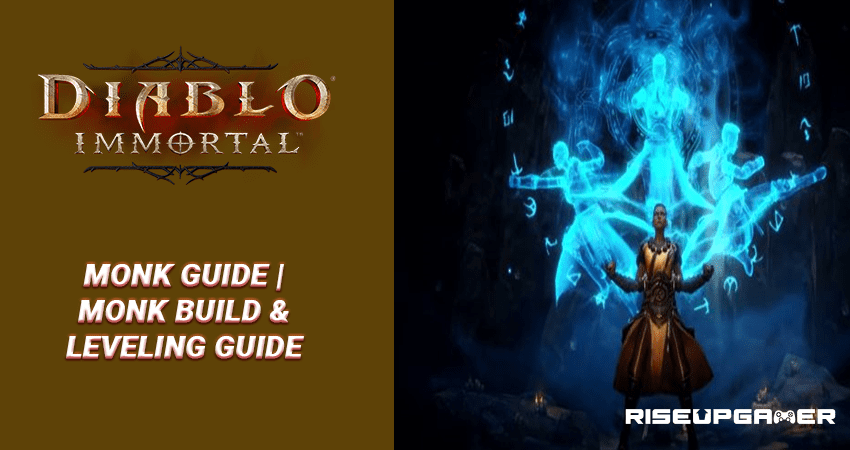 Diablo Immortal is an MMORPG developed and published by Blizzard Entertainment. The game dives deep into the storyline between Diablo II and Diablo III. Blizzard is known for their fantastic design and Diablo Immortal doesn’t disappoint, The game is officially set to release on June 2, 2022.

What is Monk in Diablo Immortal?

Monk is a playable class in Diablo Immortal with a significant amount of control, mobility, and Area-of-Effect damage. All of these are the reason for it being one of the most popular classes in the game. Most of Monk’s skills provide you with mobility and rapid AoE damage.

The character allows for dynamic gameplay with a short skill cooldown. You can readily keep using different skills and providing inputs. It is a very agile class which makes it a lot of fun to use. Apart from that, some of Monk’s skills also provide buffs and shields to the party members.

While it seems like a great class on paper, Monk does have some negative points too. Being a melee range character, Monk readily takes damage from opponents. He suffers greatly while fighting a single target due to lack of damage. While Monks can be great supports, they don’t do as well if you’re playing Solo.

The AoE and high mobility allow Monk to level up faster than the other characters. There are a variety of things that can be used to level up in Diablo Immortal and the first one is definitely equipment.

You get new equipment with everything you do in the game. If you get better equipment than your current one, your bag will start glowing. Keep an eye on that. Whenever you see it, head over to your inventory and switch any equipment with a green arrow on them. You can salvage the rest of them at the Blacksmith.

If you’re someone who buys Battle Pass to progress faster, Diablo Immortal’s BP is definitely worth it. On the lower levels, it allows you to choose a Legendary Item that enhances various skills for your character.

If you’re using a support Monk, we recommend you to get Eye of the Storm first.

Daily Activity Rewards can be unlocked once you reach level 41 which can also help you in progressing further. Moreover, you can find Gems of multiple rarities that can make you stronger which in turn makes the leveling up faster.

You can also gain a lot of XP by just progressing through the main and side quests. Exploration and Liar runs are at the heart of the game and all of these provide you with a good amount of experience while also providing laid-back gameplay.

Monk has a massive set of skills but most of them aren’t the best. So, we will highlight the best skills to use as a Monk including both the Primary and the Secondary skills.

Fists of Thunder – This is one of the two primary skills available for Monk. It teleports the character to a nearby enemy and unleashes a barrage of punches on it dealing damage. You can teleport to another enemy after the third hit on any given target.

During the ultimate, it provides you with a shield, and your damage to the enemy is increased on every hit. Also, a Thunderstorm is generated whenever an enemy dies dealing even more damage to the surrounding enemies and knocking them away.

Shield of Zen – If you’re planning to build Monk on Support, this skill is a must-have. It can be replaced with Cyclone Strike in the build mentioned above which would also mean you don’t need to get the Legendary item mentioned in the Battle Pass section.

Using this skill, the Monk dashes to an ally’s location providing a damage-absorption shield to both you and your ally. The shield also prevents any loss of control effect to occur while it exists.

That is all for this Monk Leveling and build guide. Hope the article was helpful and enjoy the game after its official release on June 2, 2022, if you don’t have your hands on it already.