By Borut Udovic
This guide will take you through the best leveling techniques and builds for Demon Hunter in Diablo Immortal. 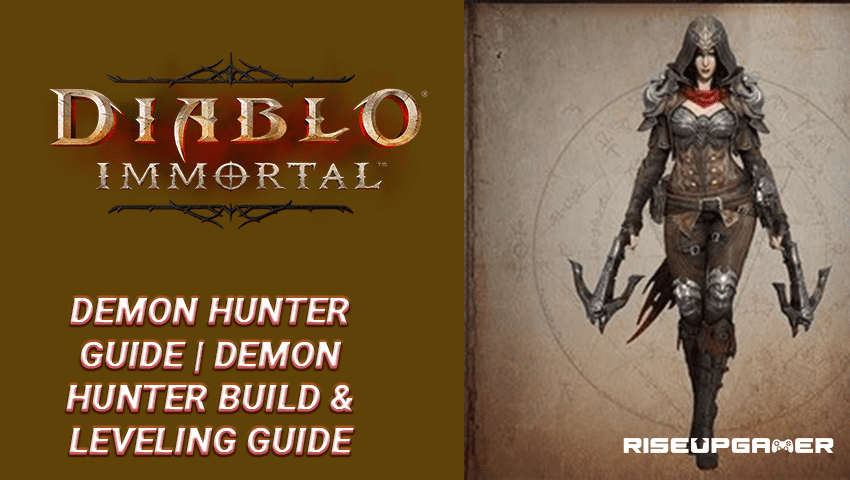 The Diablo franchise is developed and published by Blizzard Entertainment. Diablo Immortal is an MMORPG that deals with the story between Diablo II and Diablo III which are some of the most prestigious games from Blizzard among World of Warcraft, Overwatch, Hearthstone, etc.

What is Demon Hunter in Diablo Immortal?

Demon Hunter is a playable class in Diablo Immortal that specializes in dealing massive damage to a group of enemies while also dealing the most amount of damage to a single target. It’s an action-packed class that is perfect for farming, PvE, and PvP.

Currently, Demon Hunter is a female character in Diablo Immortal that can move while shooting at enemies. This allows you to position yourself safely on a battlefield while dishing out a bunch of damage at the same time. She is an aggressive character with great agility and mobility.

Positioning is very important while playing as Demon Hunter. She doesn’t have any supportive or crowd control skills which make her vulnerable to attacks. She is a selfish character that needs to be protected. If you’re using her in a solo scenario, you need to keep a safe distance.

The insane amount of damage dealt by Demon Hunter makes her the perfect choice for leveling up in Diablo Immortal. The most basic way to level up in the game is to progress through the main story and side quests.

Apart from that, Equipment can immensely help in making your character strong. If you find equipment that is better than your current one, your bag will start glowing. Keep an eye on it and once that happens, head over to your inventory and switch the equipment with a green arrow on it. The rest can be salvaged at the Blacksmith.

If you plan on buying the Battle Pass in Diablo Immortal, it can also help you in leveling up faster. In the early stages of BP, you will be given a choice to get a Legendary item that can boost your skills and make them even stronger. We recommend you to get The Hungerer for your first BP.

Different varieties of Gems can also be acquired as you progress through the game which makes your character stronger and faster to level up. And finally, Daily Activities and Liar runs can provide a significant amount of XP for leveling up as well.

Demon Hunter has a large variety of skills. Being a selfish character, she relies on her own skills as much as she relies on the positioning. Here are the best Primary and Secondary Skills for the class.

Crossbow Shot – This allows Demon Hunter to shoot an arrow that deals a significant amount of damage while moving at a slower speed. During the ultimate, the skill is enhanced for 12 seconds.

In the enhanced version, the arrows shot by this skill deal more damage with every hit. It also launches volleys of arrows and increases the movement speed. The legendary skill mentioned in the Battle Pass section also enhances this skill further and makes it so the shots pierce the enemy.

The active ability transforms you into a physical embodiment of Vengeance for 6 seconds. This buffs your Primary Skill by farming 2 extra shots every time.

While Demon Hunter has a huge set of skills, she doesn’t have a lot of variety in her builds. The build mentioned above is the best in the slot for her and if you pay attention to your position, she can be really fun to play.