Destiny 2: Most Popular PVE Weapons from Season of the Haunted

By Borut Udovic
Check out this list of most popular weapons in Season of Haunted! 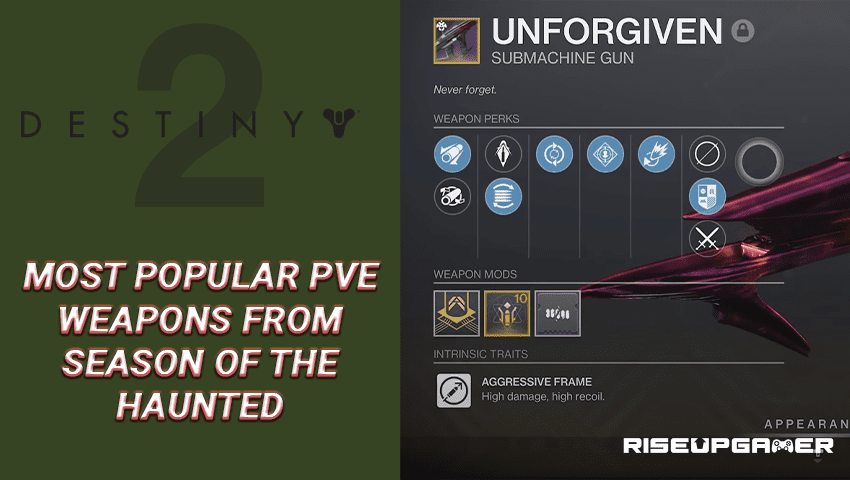 Destiny 2: Most Popular PVE Weapons from Season of the Haunted

It is a brand new kinetic Scout Rifle from the Leviathan and gets the usual perks that you would expect from a Scout Rifle such as Vorpal Weapon and Explosive Payload as well as the very rare perk combination of Triple Tap and Fourth Time’s The Charm resulting in the weapon having infinite ammo if you get all headshots on your enemies.

In addition to this, after every 4 precision shots, you will get 3 rounds back which makes it really powerful since Scout Rifles also get the Unstoppable Arms Armor mod.

You can obtain this amazing Scout Rifle from the Leviathan Ship as well as Crown of Sorrow rank-up packages. You can also focus Umbrals to farm for red borders so you can craft your favourite god rolls

You can also get the Demolishionist and Adrenaline Junkie perks which give you grenade energy after every kill and reload your weapon when you throw a grenade whereas Adrenaline Junkie will increase your damage by 33% after a single grenade kill or after five kills with itself.

It is the best roll for any grenade build since you will be throwing plenty of grenades anyways and simultaneously activating both perks. Many weapons have these perks however this is the only SMG that can get both of these perks at the same time.

Another perk called the Repulsor Brace gives you an over shield after killing an enemy affected by a void debuff allowing you to synchronize it with many of the void abilities.

You can use abilities like Echo of Undermining and then pair it with Unforgiven with Demolishionist and Repulsor Brace allowing you to get an over shield with each kill.

Other abilities to consider are the Echo of Instability, Echo of Persistence, and Offensive Bulwarks all of them work great with this weapon. You can obtain this SMG from the second and third encounters of the Duality Dungeon.

This hand cannon is currently one of the best crucible weapons in the game and works great in PvE too.

It gets damage perks in Rampage and Frenzy for general usage along with Demolishionist to help with grenade builds. Pair any of these perks with outlaw for faster reload speeds and you will have one of the most reliable PvE hand cannons in the game.

It also has the To Excess origin trait to increase your strength and discipline from kills while your super is fully making it even better for ability-focused builds.

Austringer is part of the Opulent weapon pool so you can get it to drop from Opulent chests on the Leviathan or through the Crown of Sorrow. You can also craft a god roll for yourself after obtaining 5 deep sight versions of it.

It is the best linear fusion rifle currently available and unlike normal linear, it can fire in three-round bursts which can have its own pros and cons. It’s a bit harder to get all headshots with this weapon since you need to factor in the recoil however if you manage to hit all crits then you will be able to deal much higher damage than any other linear in the game

It’s got Vorpal Weapon to allow you to get 10% more damage against bosses,Frenzy for 15% buff while in combat for 12 seconds,firing line for 20% buff by standing near two teammates.

You can pair any of these perks with things like Clown Catridge or Autoloading Holster but the best perk is Rapid Hit which allows you to shoot a three round burst so each time you fire you will get three stacks of rapid hit.This means that it will take only two shots to achieve max reload speed and stability making the weapon really powerful against bosses.

For solo play, you can go with Rapid Hit and Vorpal Weapon and for raid bosses you can opt for Rapid Hit and Firing Line to get the highest damage output out of any linear fusion rifle.Just like the Unforgiven SMG, you will be able to grab it from the second and third encounters of the Duality Dungeon.

It is a solar lightweight frame SMG and it has incandescent which spreads scorched to nearby enemies after you defeat a target. It can create massive explosions if you get a couple of kills nearby. You can easily use it to create a solar build since scorch is used for many aspects and fragments of the Solar subclasses.

You can pair it with Threat Detector for extra reload speed near enemies or Unrelenting to heal you although you can also get infinite restoration with the Ember of Imperium and Classy Restoration since it is a solar weapon.

Solar Fulmination is another mod you can use to enhance your ignitions and blow up everything in your path while the To Excess origin trait enhances your strength and discipline by 20 points after kills while your super is full.

It is one of the best primary weapons for solar builds so you should definitely grab it from the Opulent Chest on the Leviathan and via the Crown of Sorrows. You can also craft it after unlocking five deep sight versions to ensure you get the best god roll possible.

That’s it, these are the most popular weapons added in the Season of the Haunted update!