Destiny 2: How to get Trespasser (Exotic Sidearm)

By Borut Udovic
With the new season in Destiny 2, a new Exotic has arrived! Here's how you can unlock it. 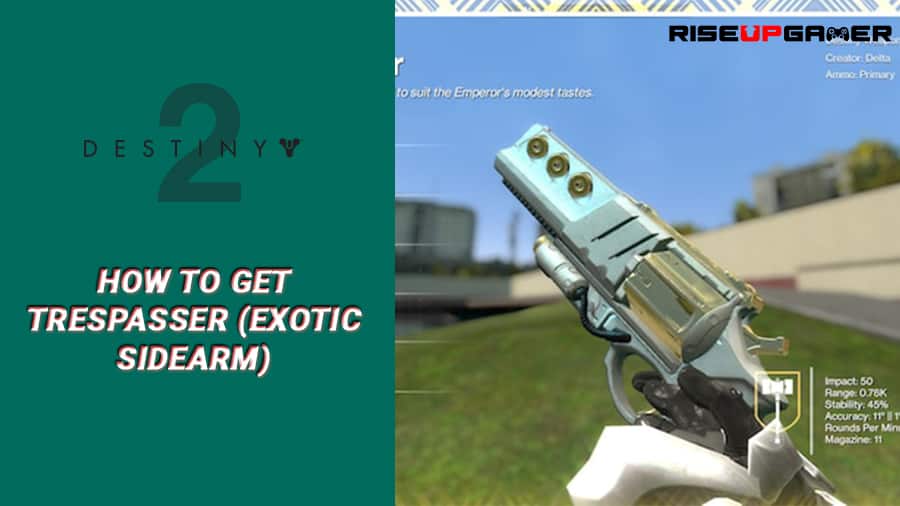 Destiny 2 was down for a long time while they rolled in the new Season update for the game. The servers came back on with a brand-new season including a new Battle Pass and a new Exotic Sidearm, Trespasser. The weapon comes from the first edition of Destiny and it was a fan favorite. Here’s all you need to know about getting Trespasser and its catalyst that unlocks an amazing skill.

Destiny 2: How to get Trespasser (Exotic Sidearm)

Trespasser has made its return to Destiny 2. But, for players who never played Destiny 1 and aren’t aware of the game much, it will be a brand new weapon for them. The sidearm was first featured in Destiny 1 and it was an absolute favorite of all the players.

Luckily, for both free-to-play and spenders out there, this weapon is available for grabbing for both of these kinds of players on the Battle Pass. There is an added advantage for the people who buy the Pass itself, as it is available on the first level of the premium tier.

The free-to-play players can acquire the weapon on level 35 of the Battle Pass which is a significant grind but you can easily get it if you play the game for a few hours every day.

The Trespasser has really good stats except for Range and Impact. The weapon is overall one of the best weapons in the game and its revamped abilities from Destiny 1 have made it even stronger and borderline broken. If you play Destiny 2 often, we will definitely recommend you get your hands on this.

When it comes to the catalyst for Trespasser, it provides an ability that helps massively while using the weapon both in PvE and PvP. When you have this work, reloading after killing an enemy greatly increases target acquisition and ADS for a short period of time. This can especially benefit players during PvE while fighting hordes.

After you get the Sidearm, there will be a marker leading you directly to Banshee-44. Here, you will get a quest called ‘No Trespassing. The quest contains three parts awarding you the catalyst for the weapon after finishing the third and final part.

The first step in the quest is to defeat 50 targets with Arc Damage, 50 Fallen Enemies, and targets with a precision final blow. This will take you to the second step completing which will lead you to the final step where you basically need to head back to the Banshee and claim your Catalyst.