Destiny 2: How to get New Purpose (Desperado Pulse Rifle!)

By Borut Udovic
Want to get the New Purpose rifle? Check out this guide! 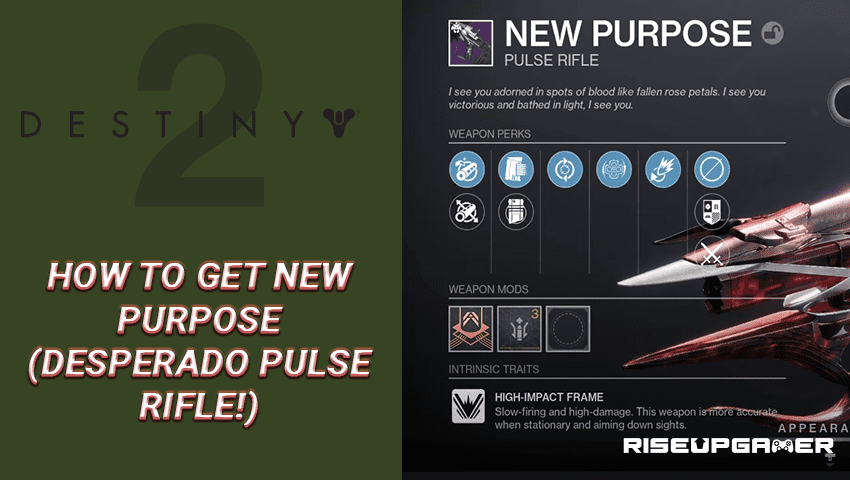 Destiny 2 Season of the Haunted brings plenty of changes to the game such as new and reworked weapons. In this guide, we will tell you how to obtain the New Purpose Pulse Rifle in the game.

Destiny 2: How to get New Purpose (Desperado Pulse Rifle!)

The New Purpose is a high impact frame pulse rifle meaning that it fires slowly but deals high damage to the enemies. It is more accurate when stationary and when you use the aim down sights. The weapon can also deal Stasis damage making it handy for situations when your enemies are equipped with Stasis Shields and Match game modifier is active

The stats for the weapon are:

In order to obtain the New Purpose pulse rifle, you will need to farm the Duality Dungeon which was recently added to the game. It can be only obtained from the final encounter in the dungeon where you will face the boss called Calus’s Greatest Shame.

Once you manage to defeat the boss, you will be able to collect it from a secret chest. Unlike the previous dungeons where the loot was locked per week, you can farm the Duality Dungeon again and again until you manage to obtain the weapon.

Just like the other new weapons in the Duality Dungeon, you won’t be able to craft it and it comes with the Origin trait Bitterspite. This trait can be pretty handy when you are dealing with tough bosses as it boosts the reload speed of the next round when you take damage.

Feeding Frenzy will ensure that each rapid kill that you make will progressively increase the reload speed for a short duration whereas Desperado can be helpful when you reload after a final blow increasing your rate of fire.

If you are interested in facing enemies in the PvE mode then going with perks like Corkscrew Rifling, Richochet Rounds, Perpetual Motion and Desperado can be a decent choice.

That’s it, now go ahead and follow these instructions to collect the New Purpose rifle in the game!