By Borut Udovic
Check out the Best Exotics & How to Get Them Solo in Destiny 2! 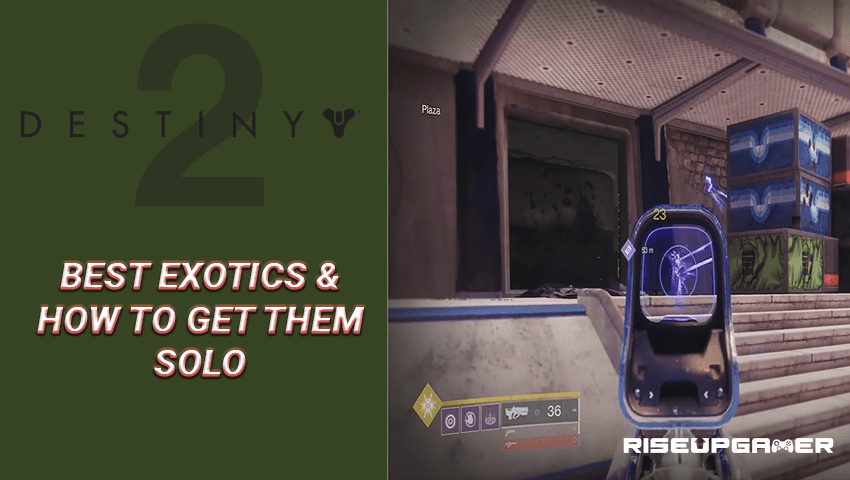 Destiny 2 is an action MMO with a single evolving world that players can enjoy with their friends. Exotics are unique item types in the game, that have powerful attributes. They are one of the most powerful weapons that players can equip one at a time, but that doesn’t mean you should not collect many of them. With all the Exotics to obtain, players will want a good roll for each Exotic in the game.

In this guide, we will show you the Best Exotics & How to Get Them Solo in Destiny 2!

There are tons of exotic weapons in Destiny 2 and most of them don’t require any paid DLCs, and we selected the top 10 free-to-play exotics you need to get and how you can get them completely solo.

The Sunshot is a 150 rpm solar hand cannon, the only remaining 150 hand cannon in the game. The exotic perk makes enemies explode whenever you kill them. It is great for add clear and PVE. But it’s not all. If the explosion kills another enemy it will create another explosion, and another as long as it keeps getting kills, and it intrinsically has explosive rounds which makes getting body shots even more forgiving.

This hand cannon is a great option for PVP because of its stats. Knowing that this is 150 rpm, this weapon has a shorter time to kill than any other hand cannon. It also has a catalyst that drops from strikes or crucible. That can increase the range by 27 and stability by 18.

This is definitely a weapon that players should take to get for both PVE and PVP.

Telesto is a great option for both PVE and PVP. This rifle has ruler PVP many times over the years and broken the game so many times. Maybe it is not the best option, but it’s still extremely powerful. The Fusion Rifle’s bolts will stick to any surface and explode whenever anyone gets close. It is the best for setting up traps around corners or you can shoot directly at enemies.

Unlike other fusion rifles, the bolts won’t have any damage fall off since the bulk of the damage is caused by the explosion of the bolts and not the impact. It makes it accurate to shoot from far away and still get a kill as long as five of the seven bolts connect.

In PVE this rifle is better because many red bar enemies only need one or two bolts to kill them, which means you can flail this around and get multiple kills very easily. Additionally, the multi-kills can make it reload itself. You can get even 40% more damage against the enemy and any PVE by the particle deconstruction which is part of the artifact.

It’s an insane weapon for add clear and turning it into a high DPS option. To top it all off, Telesto has a catalyst that drops from legend and master lost sectors. That will increase the magazine from 4 up to 7 which means you rarely need to reload.

This is a kinetic pulse rifle that creates a sieve and nanite swarms after rapid hits or after precision kills. You can deal more damage to enemies with nanites attached to them. It can take out magers very easily and even the bosses and champions, and it will stack with your fire team members’ nanites which makes this weapon’s damage rival some of the top tier special weapons.

It is not so amazing and crucible but once you get it, you can have your nanites spread to other players and then take them out really fast.

This weapon isn’t usually considered a good weapon, but players really underestimate the potential this weapon has. Firstly, it’s an auto rifle with the trait Monte Carlo method. Dealing damage with this weapon will reduce the melee cooldown and grant a chance to fully recharge your melee ability after each kill. It also has a Markov chain which increases the damage for melee kills.

Monte Carlo is a melee focused exotic, the only one of its kind alone which is good enough, but if you pair it with a throwing hammer, seismic strike, smoke grenade, or celestial fire, things can get really crazy.

If you start a fight with your melee to get your damage bonus, then as you deal damage, you’ll quickly get your melee charge back to repeat the process. There are so many combinations you could use this weapon with, and be sure to play with everything if you do manage to get Monte Carlo. It can drop randomly from exotic engrams.

This heavy shotgun can destroy magers and clear out adds just as good as some of the previously mentioned weapons. It can push enemies away, suppress them and apply a 30% debuff to them. It is great against bosses with lots of health, especially in those cases where you don’t have a tether or something like particle deconstruction.

It also has an additional perk which increases your movement speed after each hit on an enemy. It is great for solo players where you can apply the debuff and swap to the special weapon for DPS, or against champions you can deal a bit of damage, then swap to your primary weapon and quickly melt their shields.

This weapon is a random exotic drop and it does have its own catalyst. Any kill in PVE has a chance to drop its catalyst and it will increase the magazine size to 7 up from 4, and give you additional ammo reserves.

Hard Light is an auto rifle that can swap elements by holding the reload button and you don’t need to worry about any shields getting in your way. Most of the time it has only one element on your energy weapon, one on your heavy and one on your subclass.

It can also pop barrier shields, which makes an ultimate weapon against shields and nightfalls dungeons, lost sectors, and any other activity with shielded enemies. It is a very good option for PVP, with the catalyst giving plus 18 stability is pretty easy to control.

There is another perk that makes the bullets bounce off the ground or off a wall, and those bullets will deal additional damage. If someone is hiding behind a corner you can shoot the wall and potentially bounce it around a corner and finish them off.

You can get this drop randomly from exotics in the same way as the previous weapons.

This weapon is very powerful when you have its perk active. Taking arc damage will overcharge the weapon to make its shots chained between enemies and never run out of ammo. It also gives arc damage resistance to keep you alive.

This is another submachine gun with rampage and whenever you get a kill, it partially reloads itself and the catalyst buffs that even more by making each kill fully reload the magazine.

Huckleberry is a random drop from exotics and its catalyst drops from the end of strikes, crucible or gambit matches.

Whisper of the Worm

Despite being a sniper rifle, this is a heavy weapon that deals a lot more damage than most other snipers. Its exotic perk is a white nail, which gives high precision damage, and after getting 3 rapid precision shots, it automatically reloads itself from reserves.

Unfortunately, this catalyst is not available to earn for new players, but the exotic does come from the exotic kiosk in the tower for an exotic cipher, two ascendant shards and a few other materials.

This is a heavy linear fusion rifle that over penetrates enemies and splits its shots once it hits a hard surface. It can destroy everything with the particle deconstruction mod. This weapon alone can melt bosses and dungeons, and even destroy champions in one hit.

It comes from the exotic kiosk in the tower. It takes one exotic cipher and one ascendant shard. This is one of the top-tier options and definitely worth spending your exotic ciphers.

Arbalest is a kinetic linear fusion rifle that uses special ammo. This has the perk of compounding force which allows it to deal extra damage to enemy shields and it gives a built-in anti-barrier. It means that you can run this alongside a pulsed rifle with unstoppable and a sword with overload.

It is huge for solo content or high level content with LFG players that can’t rely on it. It also has disruption break to increase its own damage after breaking a shield. 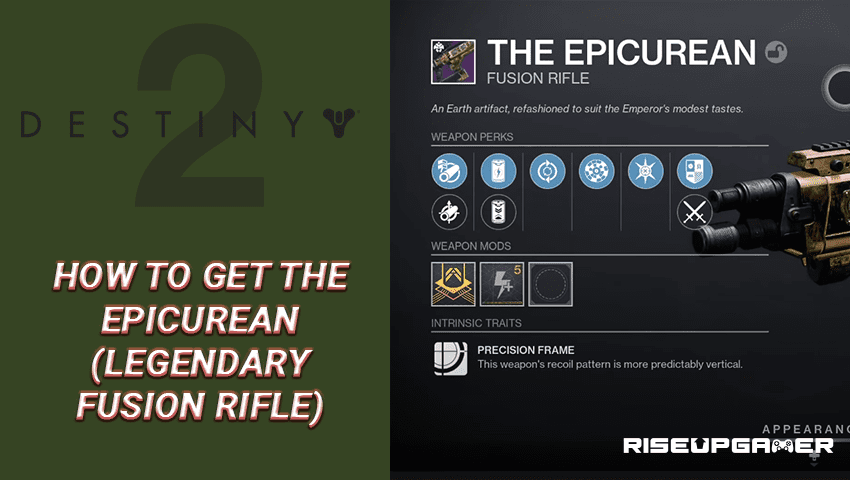 Destiny 2: How to get The Epicurean (Legendary Fusion Rifle)
Read next >
Destiny 2
Popular now
Latest