Make the most out of your armor, learn armor weaving! 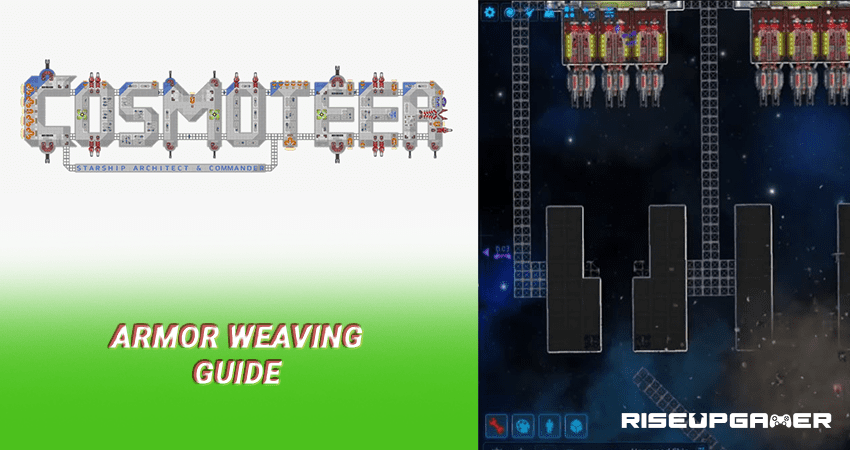 In Cosmoteer, protecting your reactor from enemy fire is perhaps the most crucial objective that should always be within the players’ minds. While avoiding enemy fire altogether is still the best way to protect them, sometimes you just have to take the attacks head-on – with armor, of course. With that being said, it’s not enough to just stack as much armor as you can in front of your reactors, what you need is careful planning and weaving together armor in creative ways to make the most out of them.

In this guide, we will be showing you how to make the most out of armor in Cosmoteer, particularly how to do Armor Weaving.

Armor Weaving is how you effectively increase your health without changing anything other than the arrangement or placement of your armor.

Expertly weaving armor in this game forces your opponents to go through as much armor as possible before even actually hitting your ships.

Let us show you how placing armor carefully can significantly determine whether you survive an enemy attack or not.

Take a look at the three armor arrangements from the image above. The one on the left is the basic armor arrangement (stacking 1×1 armor tiles together), the middle is a stack of 2×1 armor, and the right is a combination of both and is interwoven into one another.

When taking enemy fire, the one on the left takes the most damage. Opponents can penetrate them much easier due to their straightforward placement. Their weapons can eat through it without much resistance as long as they concentrate their fire on one point.

Actraiser Renaissance: Does It Have Ultrawide Support | 21:9

The one in the middle would fare better but is still generally ineffective. It is just a slightly upgraded version of the first armor arrangement we have shown.

As you may notice from observing the two armor arrangements (left and middle), the armor on the sides did not have any factor at all in protecting your ships – it is effectively untouched by the enemy fire.

Armor is there to take on enemy fire, and if it’s not taking it, it is practically useless – that is what’s happening in the first two armor arrangements.

Now we look at the one on the right, the armor is interwoven and its placement is more intricate. As you may observe, it protected the ship and the reactor the most.

This is because almost every armor tile placed played a factor in protecting you. Even though the attack was coming from just one point, it felt spread out due to the careful placement of the armor tiles.

As you may see, even the armor on the sides took some damage, which is precisely what you want. After all, armor is expensive in this game, so you would want to make the most of it all the time.

In the image above, you can see that the one on the left has the most armor remaining but was still the first one to go down. The middle one fared better but still wasted too many armor tiles. While on the right, almost every armor tile played a factor in protecting you.

That is the power of armor weaving. It is very useful and very important to have.

Lastly, while armor weaving protects you the most, how it is positioned is crucial in determining how effective it can be.

This just means that you have to position your armor relative to where the enemy fire is coming from. If it’s from the left, then just make a slight adjustment to where your armor is facing for it to protect you better.

There you have it! Now you know how important armor weaving is in Cosmoteer. As a general use of the thumb, always make sure to weave your armor and place them relative to the position of where you expect the enemy fire to come from.