Can you Play Diablo Immortal Offline?

By Borut Udovic
Time to check whether you play Diablo Immortal offline or not! 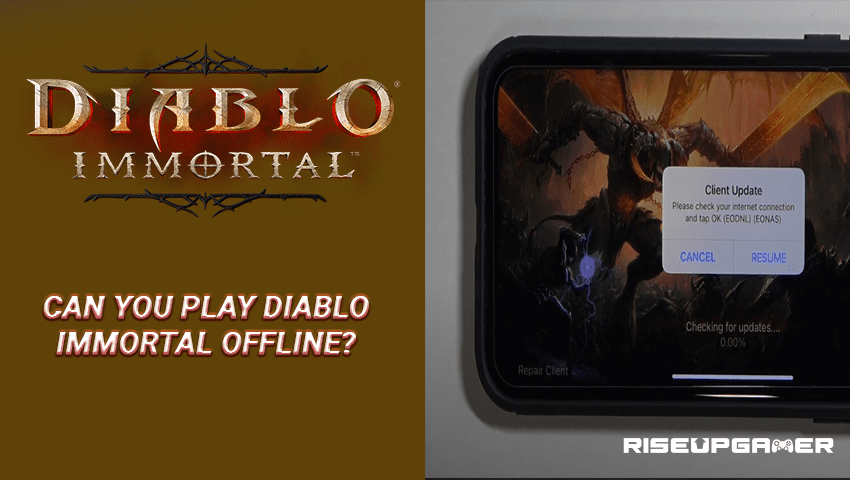 Diablo Immortal is a recently released free to play online MMO RPG that has taken the world by storm and has become very popular among players. However, some people are wondering whether they will be able to enjoy the game offline without an active internet connection or not. In this guide, we will tell you whether you can play Diablo Immortal offline.

Can you Play Diablo Immortal Offline?

Diablo Immortal is currently available on all platforms including iOS, Android and PC which has made it very popular among gamers. While the previous Diablo games such as Diablo III can be played offline, unfortunately, the same isn’t applicable for Diablo Immortal.

According to the developers, you will need to be constantly connected to the internet to enjoy the game as some dungeons in the game cannot be played solo and you will need to play them with other players in co-op mode. The reason behind this is that the game is designed to be a multiplayer experience due to its MMORPG aspects that make online matchmaking an integral part of the game.

Another potential reason could be the Battle.net integration which requires players to log in before they can access the game making it mandatory to have an active internet connection.

So if you wish to play the game offline, you are in for bad luck as it will simply result in an error and disconnect you from the game’s servers. Once you are disconnected, you will be given 10 seconds to restore your internet connection and rejoin the game by pressing the retry button.

However, the good thing is that upon restoring your connection, you will be reconnected to the same location in the game so you won’t have to worry about losing progress if you are facing connectivity issues

That’s everything you need to know about whether Diablo Immortal can be played offline or not!