Buyer’s Guide to the Statue of Her Excellency the Almighty Narukami Ogosho: Genshin Impact

By Borut Udovic
Time to learn the Buyer’s guide for the statue of her Excellency. 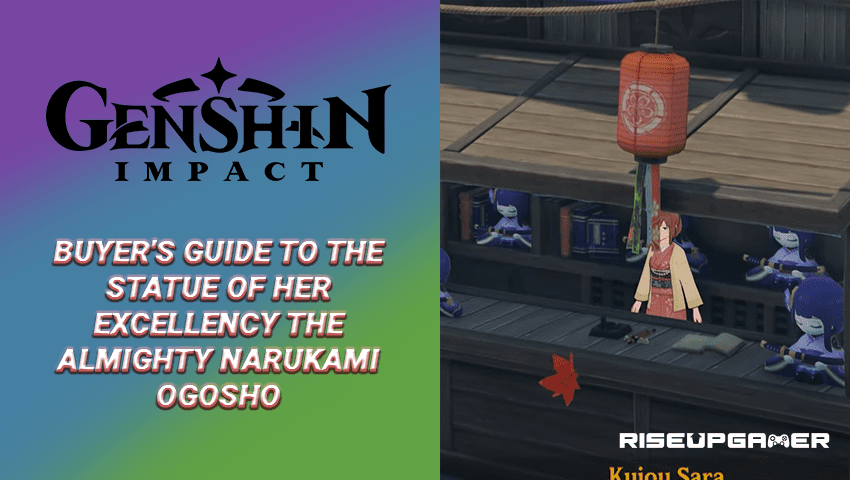 Genshin Impact has a ton of world quests that are stranded around all realms. These world quests are unique on their own and give out different rewards once finished. The World quest called “Buyer’s Guide to the Statue of Her Excellency, the almighty Narukami Ogosho, God of Thunder” is a long and complex quest that will reward you will interesting loot!

This guide will show you how to complete this world quest in Genshin Impact.

Buyer’s Guide to the Statue of Her Excellency the Almighty Narukami Ogosho: Genshin Impact

This quest can be found in your adventure log, under the “Hues of the Violet Garden”, in the “Legends of the Kasen” menu. When you accept the quest, you will need to go to Ritou and search for Kujou Sara.

Once you reach the area, a dialog will begin with Kujou Sara and the guards, with her explaining that the situation is serious and that everyone needs to remain vigilant.

A big dialog will begin where Kujou Sara will explain to Paimon that there is not a simple figurine for sale. It’s the mighty statue of her Excellency.

And that there are a total of 300 statues up for sale and customers are limited to only 1 statue.

As you continue to chat with Kujou Sara, you will hear a strange noise and ask yourself what that was. On the cut-scene, you will notice a barrel with a tail on it. That is where the dialog will end and you will start examining the barrel.

Walk toward the wooden barrel and reveal the hidden person. Inside you will find Sayu.

Sayu will be sad that she missed her line with purchasing a statue. She had fallen asleep while she was waiting for her place. Now her problem will be purchasing it for a bigger price from someone.

You will then need to ask 3 passers what is going on. You will ask two passers and they will tell you that something strange is going on and didn’t manage to get their hands on the statues.

The third passer that you ask will tell you that he got it but will not sell it for a higher price.

The next objective to do is to continue to get clues on what is going on with the statues. You will go to the shop and speak with Kaede.

Kaede will tell you that she was not on that shift when the statues were sold, and will confirm with you that all 300 Statues have been sold.

She will give confidence to the customers that it was only the first batch of statues and more will come.

Sayu will begin investigating where all the statues have gone off to, as she owes Sara a statue.

She will explain that she had fallen asleep and counted her snoring and hearing the shop sales. They will make the math and come to a conclusion that it would have taken 5 hours for the statues to be sold.

But the sales have been going on for only 4 hours.

To begin the investigation, you must go back to the passer named Junpei and ask him where he got the statue from. He will start lying and reveal himself in his lies.

He will explain how he managed to get his hands on the statue.

It turns out that one of the store staff members had been moving boxes filled with statues and trying to sell them to others for a higher price. Junpei got a statue just to keep quiet and not say anything.

Kujou Sara will come towards you and hear everything that Junpei had said. She will say that staff member shop abuse is illegal, as the staff member was forging false sales records.

Junpei will hand over the statue as evidence of the case.

Kujou Sara will assign you to an official investigation about the statue and tell you to the nearest transaction site.

This transaction site can be found on the edge of the island on a pier. It will be marked as a yellow circle above the map.

You will meet up with Seigou. He will try to keep a low profile, you will go undercover and explain to him that you have been referred by an existing customer. That is Junpei, who witnessed him stealing the statues.

Seigou will up the price again and say that there is nothing that can be done for it to be lowered. Offer him a figurine and a discount for the statue.

You will be given a menu where you will be able to offer an X amount of money for the statue to Seigou.

On the left side of the screen, you will also see his mood which will depend on what type of price you add.

Paimon will buy some time for Kujou Sara to come to the pier with some guards and begin escorting Seigou towards the police station for abusing his position for personal gain and falsifying accounts.

Your next objective is to go to Kaede at the shop and explain to her the whole situation on what has happened, and why people have not gotten any statues.

Kaede will offer one of the display statues to Sayu and Sayu will then be able to give the statue to Kujou Sara as she had promised.

Once you’ve obtained the display statue, go and meet with Sara at the police station with your gift.

Ei will come, who is the Allmighty Narukami Ogosho, God of Thunder. Sara will become shy about the statue that she got as a gift, and make an excuse on why she needs to leave.

Ei will then reward you with a statue of her own and you will complete the quest.