Best Weapons to Use in the 1.0.1.0g Patch: Tiny Tina’s Wonderlands

By Borut Udovic
Check out the best weapons after the newest hotfix in Tiny Tina’s Wonderlands! 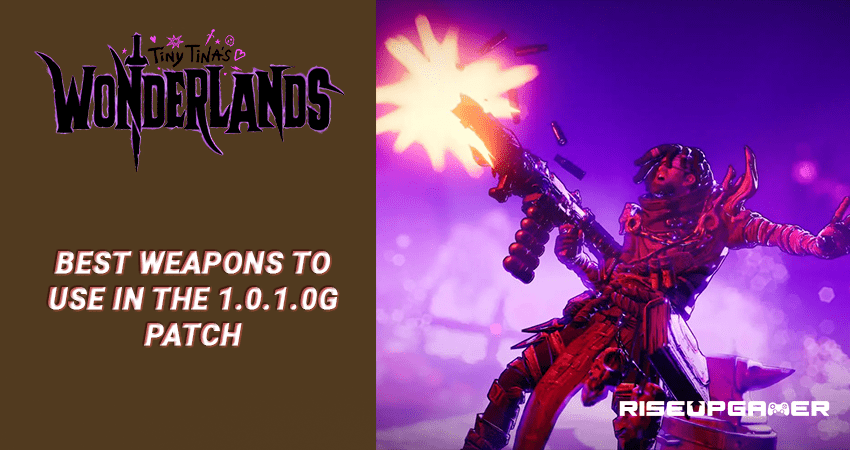 After the recent hotfix of Tiny Tina’s Wonderlands. There have been many interesting new weapons added to the game and some have been nerfed. The 1.0.1.0.g patch has nerfed weapons, but some interesting enchants have taken place that will get you the best combination to get the highest performance out of your build.

This guide will show you the best weapons to use after the 1.0.1.0.g hotfix in Tiny Tina’s Wonderlands.

Best Weapons to Use in the 1.0.1.0g Patch: Tiny Tina’s Wonderlands

Poison SMGs have been buffed in general. The weapon has received an overall 50% buff, the single damage stat has only been nerfed by a small amount.

The weapon has two types of firing:

The single beam will fire just 1 beam and damage only one target, the dual-beam firing mode will create a ricochet on the targets and hit an additional target with split damage.

The best roll for this weapon that you need to look for is the “Consume 2 Ammo per Shot”. This way you will use the weapon in a single beam firing mode and each beam will consume two pieces of ammo. Meaning you will deal twice as much damage.

The weapon is best to use for mobbing. It will not perform that well against bosses.

The starting damage from the older version of the weapon was 800×2. Now it has been nerfed to 280×2 damage.

The fire rate of the weapon is still great and it will mow down enemies pretty easily. The nerf has affected the ammo as well.

Before you were shredding through enemies faster. Now you need more bullets to kill them, meaning that you will waste even more ammo.

One of the most powerful spells in the game got nerfed for around 30%. The channeling bonus of the weapon has been removed.

There is a great replacement for this skill in the newest hotfix. The Ice Spikes skills are one of the best spells to use right now. It will take around 2-4 Ice Spikes skill to demolish a boss.

The AUTOMAGIC.EXE received a 50% buff. The bullets of this rapid-firing pistol will penetrate enemies, and help you damage a giant group of mobs.

The 50% buff has been spread through all the stats of the weapon. Mobbing is great with this weapon, and the “consumes 2 ammo per shot” roll will come in handy for dealing extra damage.

This legendary weapon had its Critical hit damage reduced to 50%, and the gun damage has been reduced by 30%.

Although the nerf, the weapon still performs greatly against mobs and bosses. The best way to use the weapon is to have the enchant “From the Shadows”, which will summon arrows that will fly towards the target when you deal critical damage.