By Borut Udovic
Time to learn how to make the best melee build in Tiny Tina’s Wonderlands. 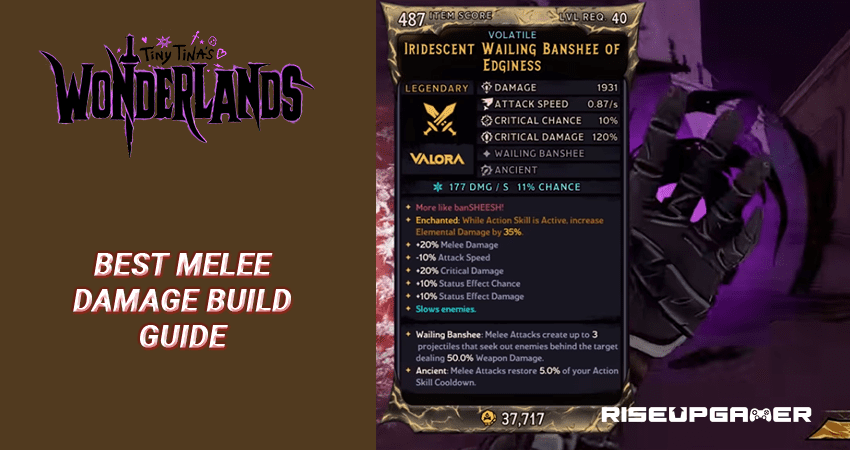 You can make different character builds, depending on how you like to play the game. All these interesting items that your character can equip can be combined together and boost your character stats greatly. Reading what the item offers and making sure to combine each other together to boost you will give you an upper hand in finishing the main story and the chaos dungeon will be completed easily.

This guide will show you how to make the best melee damage character in Tiny Tina’s Wonderlands.

This easy build requires at least three essential items to make it work.

Your main starting weapon will be the Wailing Banshee of Edginess. This is the highest damaging weapon that will create a splash chill that will deal an insane amount of damage and slow enemies.

This skill will activate at least on every fourth of fifth hit that you do on a mob.

For your ranged ability, you want to equip the Sootcough of the Anvil pistol. This pistol will not be used for fighting, take advantage of the 3% melee damage increase that is given to you, and the enemy that is being debuffed.

This ability stacks as you continue to hit enemies. This weapon will work greatly only against bosses, the reason being that bosses require more hits to be killed.

The Live Wire is the next legendary weapon that you want to use for this build. This weapon will create shock chains just by having the weapon equipped and hitting melee strikes.

The weapon also gives you a good damage increase from the skill called “Exploit the Weakness”.

The White Rider is an essential weapon for this build. Put the weapon on a single beam to have the damage increased and quickly delete all the flying enemies.

An optional choice for the build is also the Gluttony pistol. Just because this gun gives you only +40% melee damage increase.

The two rings that you want to equip are the essentials:

These are the only best rings for this build as they increase the melee critical hit damage, and increase the damage of your action skills. Great for bosses.

Make sure to look for the Melee Damage rolls on these rings to get the best performance.

The two shields that you will equip are essential because one will be used for mobbing, and the other for bosses. They are:

The Frosting Body Rune will keep you alive and restore your health on each kill when you are mobbing. Also for the extra fire damage.

The Cursed Wit is only effective for bossing because you will be in close range and get many hits. The main buff from this shield is that you get 100% bonus damage when you are near enemies.

The Paradigm of Crushing Mayhem is the essential armor piece for this build. The best build that will give you a damage increase in all areas, extra additional 35.1% melee damage.

You also get an extra 50% melee damage and ability damage increase as you increase your spell damage.

The amulet that you want to use for the build is the Raging Theurge of Heroism. This amulet combines greatly with the armor piece that you equipped.

Casting a spell will reduce the action skill cooldown, and also increase the spell damage that you do. Increased spell damage will give you an additional boost to your melee and ability damage from your armor.

The spell that you want to activate for the build is the Arcane Bolt. This spell will heal you and is being casted for a longer period of time. Meaning that you will have a spell damage increase for a longer time.

The bossing spell that you need to use is the Buffmeister. The important roles that you want to get are “Bonk!” and “Kchow!”

You also get a good speed bonus from this spell to reposition yourself better in a boss fight or even mobbing.

The Twin Soul melee weapon will be the essential bossing weapon. The weapon deals great damage and has fast wind speed.

The main important thing to know for the enchants is that you want to find melee damage increase buffs.

The image below will display how you want to set up your skill tree to get the most out of your damage build:

The blast chill is the most important skill that you want to keep an eye on. This skill will deal 50% increased melee damage if you proc a Blast Chill effect on a target.

The Proc for this skill is 20% chance.

To sum up how the build will work perfectly, use the skill that you need for either bossing or mobbing, with all the effects activated from the skill, begin getting close to the enemies and constantly attack.

As you attack, there will be stacks on enemies that debuff them, dealing less damage to you, and buffing you, which will deal more damage to them.

Here is a list of the following Hero Points that you want to use on your character:

Basically, you want to put all your points to Strength and Dexterity because that increases the damage you o and the critical damage.