By Borut Udovic
Check out this guide to complete the Best Chums mission in Tiny Tina’s Wonderlands! 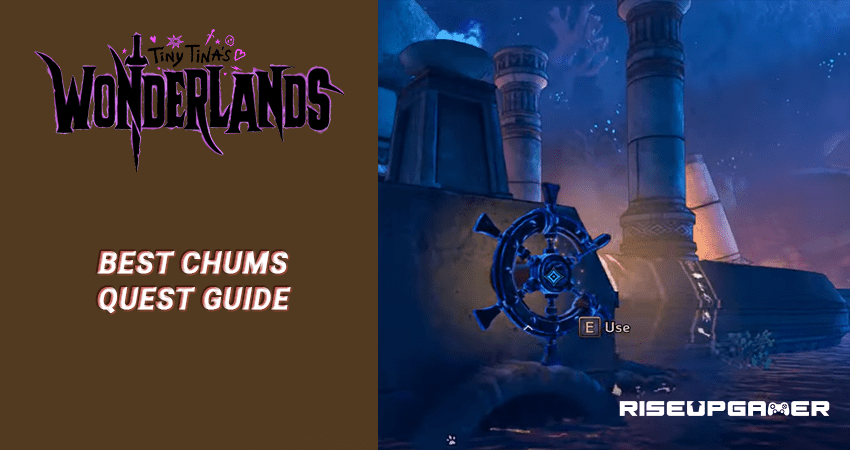 Tiny Tina’s Wonderlands has recently received a new expansion called Coiled Captors. It adds a new dungeon and a boss for players to fight against. In this guide, we will show you how to complete the Best Chums mission in the game.

In order to start the Best Chums mission, head over to Dreamveil Overlook and proceed towards the mirror-like structure near the Wheel of Fate.

Select the difficulty of your choice and interact with the mirror to initiate a cutscene.

You will be then teleported to a snowy area and your first objective would be to kill the temple guards. Defeat the enemies in the area and then proceed towards the temple

Once you enter the temple, you will need to solve a puzzle where you need to shoot the red colour objects on both the pillars. Three shark heads will start glowing on those pillars and the door will be open so you can continue further.

In the next room, jump down below and use the valve to flood the room with water. Climb onto the wooden crate to grab the ledge and access the next area.

Defeat the enemies in the area and then use the blue portal to proceed further.

Now in this section of the quest, you will need to find three columns spread across the area and align them. You will need the statues on the column till they stop moving in order to align them. These columns will then go underground and the seawargs next to them will then come alive

You will need to first align the columns on the centre and the right side before you can align the column on the left. Once you manage to align all the three columns, a portal will appear and you will be able to proceed to the next area.

In this area, you will need to find all the water valves and open them so the prisoner doesn’t die due to thirst. Defeat the enemies in the area and then turn all the four valves to flood the area with water. The portal will then open and you can use it to enter the next area.

Now in the portion of the quest, you will need to survive in the area until the water rises. Defeat the enemies nearby and be careful of the lava around the edges of the map as it can kill you if you fall into it.

A good strategy is to stay in the same area so you can easily shoot all the enemies and don’t have to worry about the lava.

The water level will rise too much at one point and you will need to use the valves to drain some of the water. Proceed into the portal to reach the next room.

In the next area, you will need to stick to high ground and avoid the floor otherwise the lava will kill you. Once you reach the centre of the room, you will need to again align three columns by shooting the statues on them. The columns will then go underground after you align them and you will be able to use the portal to reach the final area

Now it’s time for a boss fight and you will need to defeat “Chums” the Old God, a level 40 boss. You will need to maintain a distance from him as he will chase after you with his mouth open to bite you. He will also send an electric shockwave in your direction from time to time so it’s better not to stay in the same spot for too long.

You will also need to be careful of other enemies in the area as they can reduce your health if you are not paying attention. Defeating Chums isn’t too hard if you have selected Difficulty 1 however the same cannot be said about higher difficulty levels.

Once you manage to defeat him, you will be able to grab plenty of loot from his drop. Collect all the loot in the area and then use the portal to get back to Dreamveil Overlook. The quest is now completed and you can spin the wheel of fate to grab more loot.

That’s it, now you can easily complete the Best Chums mission in the game!