Only have 5GB of free space? Worry not, here are 15 great games!

Are you looking for an excellent game to play right now but is unfortunately short on storage space? After all, today’s common games eat up tons of space, with over a 100GB being the norm now for modern AAA games. Thankfully, there are still some gems players can sink hours of enjoyment into that are only a fraction of that enormous download size. While most of them may already be old for some, they can still pack a ton of fun when given the proper time.

Without further ado, here are 15 of the best PC games under 5GB to play right now.

Far Cry 3 is a first-person open-world game from Ubisoft where players are thrown in a hostile tropical jungle tasked to survive and save friends no matter the cost.

Wreak havoc, take in all the chaos, and explore the sprawling lands of arguably the best Far Cry to date. It has a download size of only 4.88GB.

Left 4 Dead is a multiplayer first-person zombie game that has stood the test of time. This title came from the brilliant minds of the people at Steam. It has an addicting gameplay loop where players fight tons and tons of zombies.

No matter how many sessions you have played, you simply cannot have enough more of this game, especially when played with friends.

GTA San Andreas is one of the most well-known games in history, with many people replaying it to this day. GTA San Andreas had made so much impact to players that most would argue that it plays better and is definitely more enjoyable than today’s modern games.

With a download size of only 3.6GB, you can easily grab yourself this game and try to find its magic. Sink a few hours on it, and we bet you’d already be hooked.

Rebellion Software’s Sniper Elite v2 goes against the norms set by most shooter games. This title wants players to sneak their way into enemy territory, picking off several targets, with a trusty sniper at hand -hence, the name Sniper Elite.

That said, impatient players may still opt for a run-and-gun approach. Just remember, the protagonist on this game isn’t as indestructible as you may think. He goes down just after a few rounds, making it so that tactical approach is apparent.

Mafia is an open-world third-person action game that is heavily inspired by the critically-acclaimed movie trilogy, “The Godfather.” In this game, players rise to the rank of the mob world taking down enemies left and right.

Another thing of interest in this game is the original licensed music it has. Cruise around the city taking in the music of that particular era, immersing you deeper and deeper into its world. It has an impressive download size of only 3GB.

Assassin’s Creed III is an open-world action game based on the 18th century featuring the American Revolution. While the Assassin’s Creed of today may have steered away from the gameplay formula it has established from its earlier titles, AC III still packs a punch in both the enjoyment and storytelling aspect.

With a download size of just a tad below 5GB, you can experience being an assassin once again in the game’s particular set period.

Need for Speed: Hot Pursuit builds around the gameplay racing formula already tried and tested in the long-running Need for Speed franchise. In this game, players will see new race tracks on top of astonishing graphics considering the time where this particular title was released.

Its racing gameplay still holds to par to some of today’s newest games from the genre. Given its download size of only 4GB, it wouldn’t really be a bad idea to pick this one up and give it a chance.

For shooter games, there may be no better game under 5GB than Call of Duty 4: Modern Warfare. With its insanely good cinematics, truly impressive graphics, and genuinely excellent gameplay, COD 4: Modern Warfare is widely regarded as one of the best games ever made – let alone, from the Call of Duty franchise.

Because of its massive success, players have clamored for a remastered version and even a sequel. Nevertheless, the original only has a download size of 5GB. Believe us, you owe it to yourself to experience this game even for just a bit.

Just Cause 2 is as third-person action open-world game where players can cause chaos and insanity as much as they want to. This game’s map is practically an enormous sandbox. You can drive boats, helicopters, planes, cars, and so much more.

This game is sure to get your blood pumping with its over-the-top action and explosions galore! Try this one out by just allotting 2.7GB of space.

This is a mission-based first-person shooting game which employs a futuristic approach where the gameplay environment is actually based on jungles, rural areas, and abandoned buildings. Players will be put in the shoes of a highly-advanced soldier equipped with a futuristic suit that has tons of abilities that can make your encounters much easier.

Crysis 2 has a download size of just about 5GB – impressive, considering its great graphics and sweet gameplay loop.

Gears of War is a science-fiction third-person shooting game that has made a significant impact to the gaming industry with its truly revolutionary cover-shooting feature. It is safe to say that tons of newer games that followed it borrowed some elements from its excellent gameplay, and we really couldn’t blame them. That is how excellent Gears of War’s cover-shooting mechanic is.

Even more than that, Gears of War also has a great story to tell. If you like alien combat drama in your games, this one is definitely a try. It has a download size of only 3.2GB.

BulletStorm focuses heavily on the skills you can deploy alongside some excellent gunplay. It is set on a science-fiction world with several fictional weapons you can use at your disposal at any given time. That said, its best feature is arguably the Skillshot.

It gives players a certain number of points after killing enemies in creative ways. This makes gameplay never repetitive as players are incentivized to get as creative as possible in dealing with their enemies. It has a download size of just above 3GB.

If you like real-time strategy games, then Red Alert 3 may just be the one for you. This game builds around the working formula from the series’ two previous iterations while also adding in some new features for players to get into.

This game may prove intimidating at first, especially if you are new to the franchise, but given the right amount of time, fiddling with it would be a breeze and a whole lot of fun.

Perhaps one of the most challenging games to come out in recent memory is The Darkest Dungeon. Do not be fooled with its art-style, this game is for those that want to test their gaming skills to the max. Int this game, players are in charge of an expedition back to your ancestral manor where several enemies are waiting to take you apart.

This title will require you to manage several factors, and when people die here, they are permanently gone. So every move definitely matters. As stressful as that all may sound, this game makes you feel truly rewarded when everything works out in your favor. Try this bad boy out, if you dare.

If horror is what you want, then you can’t go wrong from trying out Outlast. This horror first-person game will put you on your toes constantly as you traverse the game’s dark, brooding, and genuinely terrifying asylum.

Prepare for several jump scares, stomach-churning gore, and skin-crawling frights when picking up this one. For those that love the horror genre, this one is a must try. But for those that only want to have a good time with bright lights and rainbows, think twice now. It has a download size of about 5GB. 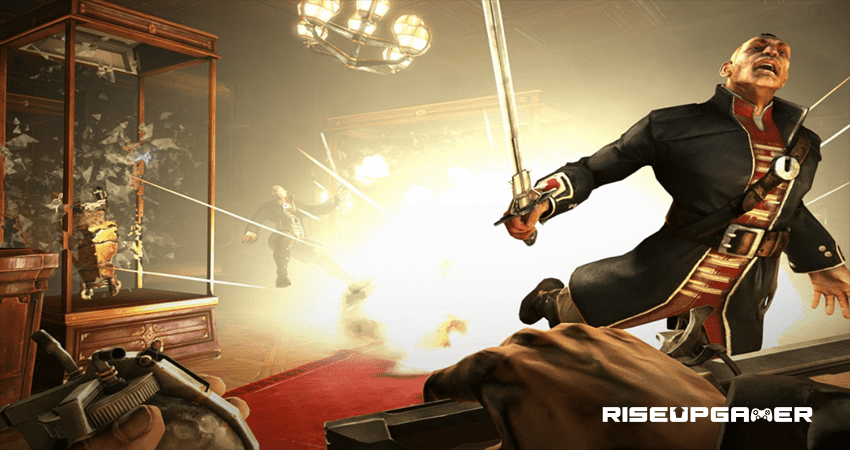