By Borut Udovic
Let’s see what the Barony of Loth faction has to offer in Songs of Conquest! 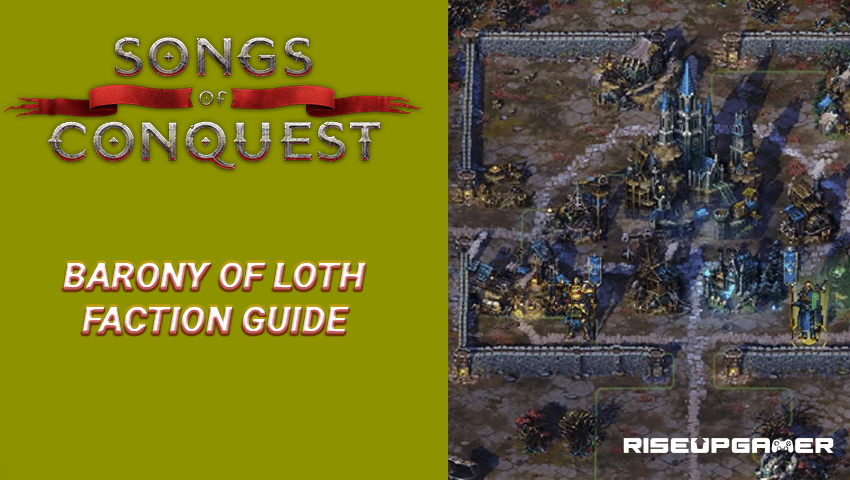 Songs of Conquest is a new strategy-based game where you can create an empire with one of the four factions to build great objects, and create a colony that will follow your commands and strives to defeat everyone who opposes them. The factions are different from each other but have some small similarities.

This guide will show you all you need to know about the Barony of Loth faction in Songs of Conquest.

This is one of the most popular factions of the game.

The Risen is one of the main and most common units in the game. These are beforehand fallen units that have risen to fight again.

It’s important to know that once humans die, they become risen and will continue fighting again, or if you are attacking this faction, don’t get confused if they beat you as they die.

The Units will be the main source of damage and defense in this game. Opening up your units tab, you will see all the available and unavailable units in a tab sorted by rarity.

All these units can give you different essence which can help you with your skills.

Here is a list of all the available units the faction has to offer and their essences:

The essence rarity and quality also go in order:

The Rats are the most common units where you can stack big numbers and they will attack as much as possible. These units don’t have much health or attack, but due to their Berserker stat. They gain extra damage and movement speed as they get hit.

The Plagued Rats are an upgraded version of the normal rats, they just have an extra venomous perk, which deals extra poison damage.

The Oathbound are really good. They have great melee offense, defense, and health which is great for the battlefield. You can place many oathbound units to tank the starting phase of the game.

An important thing that you can do with these units is to upgrade them to Legionnaires. Legionnaires have almost twice the stats as regular ones, and they also gain +30 Defense and +50% Ranged Resistance.

The Cultist is the musician of the faction. He is the buffer for the whole team in the faction. It’s interesting how these Cultists deal great damage and can also be placed in the middle of the group or close to the front lines.

The Oathsinger is the upgraded version of the Cultist, this upgraded class has double the stats of the regular Cultist, and their special buff is that they give +5 Defense to Friendly units.

The Toxicologist is the ranged unit of the faction, these ranged firing units have great damaging stats and are also able to poison the enemy due to their venomous perk.

The Bane is the upgraded version of the Toxicologist, their stats are doubled and they get an ability called “Aim”. This ability grants Banes an additional +3 Range and +3 Damage.

Aurelian Scholar is the alternative ranged offense unit that will deal slightly more damage than the Toxicologist. If you chose these units you need to know that you cannot place more than the toxicologists, these units come less in numbers.

The upgraded version of the scholar is the Necromancer. This unit has an amazing ability called “Charge Essence”. This ability will generate the unit’s essence for the wielder. The stats are also doubled for this upgraded unit.

Scavenged Bones have a small troop size. These units are good because they deal a lot of damage, and they have great defense and mobility.

The Blessed Bones units are the upgraded version of the Scavenged Bones. Their stats are doubled and they come with an ability called “Oathbound Sacrifice”.

This ability allows them to “Sacrifice 1 unit and summon a Temporary Oathbound with 15 units in front of you”.

The Spectre is a high damage dealing unit where you can only place 10 of them on the field. This unit also has great mobility.

This unit also has a great ability called Stealthy, which ignores the zone of control. You can do damage and get away from zones where enemies are.

Seneschal is the upgraded version of this unit. You get double the status effects, the same stealthy ability, and an extra ability called Strengthen.

The last and the best unit of this faction is the Legion. You can access this unit in mid-game and he comes with great damage and health. This unit has two interesting spells, they are:

The Wielders are the main champions of the game. These are the leaders with abilities and ones that do the most damage. These are the three main wielders that you would like to play for this faction:

Here is a list of all the wielders that you can use for the faction:

Opening up your Tutorial & Codex menu will show what each wielder has to offer, and you can check the skills menu to see what their skill does.

With the Barony of Loth you want to focus on 3 main essences:

The spells that you want to use and set up on your quick bar are:

The skills will vary on how you want to play the game. There are different skills that you can use and see what they do if you open up the tutorial & codex menu and read out what each skill does and what will fit you best.

The building is one of the essential parts of the game. The building structures are separated into 3 different groups, they are:

The Small builds section is the builds that you can create at the start of the game and they will require small amounts of materials and gold.

NOTE that gold is not the essential currency for the game. Materials such as wood and stone are more important because you will need them to create different builds.

In the small section you have the following builds:

You want to start by creating the material buildings which will generate more and more materials for you to begin your research and create more buildings.

Make sure to read out what each building offers, that way you will know what exact build you can make.

The Medium building section can be unlocked at the early-mid time of the game, and in this section, you have a total of 4 builds, they are:

In the Large building section there are 3 large builds that you can make:

Note that you cannot build everything. Next to your big green “BUILD” button, you will see a notification that will tell you if you can or are not able to build this type of building.