Time to defeat the final boss in Dawn of the Ragnarok DLC! 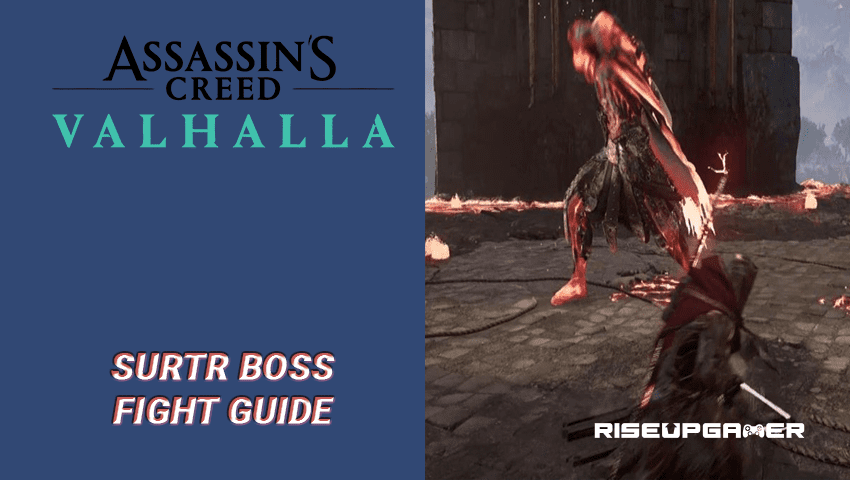 Assassin’s Creed Valhalla is an open-world RPG that follows the story of Eivor and the Raven Clan as they try to conquer the lands of England and beyond by making alliances and friends. The game recently received its third and biggest DLC called the Dawn of Ragnarok sees Odin trying to save his son Baldr in Nilfeheim.

This guide will tell you how to defeat Sutr in the Dawn of Ragnarok DLC.

It’s recommended that you max out your gear and use gear that is mostly resistant to fire damage. The first attack that Surtr does is a wave attack that sends a wave of fire towards the location of the player.

When you see him performing this attack, simply dodge out of the way.

Next is the bomb attack where Surtr will raise his hands and smash them into the ground creating a fiery circle that you need to dodge otherwise you will take damage.

Surtr’s weakness is both of his arms and his left leg so you can use a bow and arrow to stun him for a while.

While his arms are barely visible, you can easily stun his legs to deliver some damage.

His melee attacks mainly range from uppercut or a big downward and these cannot be blocked so you need to dodge them at the perfect time.

If you manage to dodge those attacks and have the time ability unlocked then the time will be slowed down so you can deliver some extra damage.

After he is done with his attacks, you can go ahead and perform a stun attack to deal some sweet damage. Surtr will also vanish from time to time and go into the lava to either perform a wave attack, bomb attack or simply charge toward you.

Keep on dodging his attacks with your weapons or use a bow and arrow to maintain your distance.

After you run into this spot, phase 2 of the fight will begin where Surtr will appear and put his sword into the ground summoning a lot of fireballs which you need to dodge at all costs.

If you stay in those fireballs, you will take fire damage and it can hurt your character, especially on higher difficulties.

Once the fireball attack is over, immediately dodge his melee attack otherwise it will definitely hurt if you are on a difficulty that is higher than normal.

When you see Surtr about to raise his sword, he will perform a downward slash toward you creating a fire area effect around the area that he struck.

You need to watch out for the fire and sword otherwise you will take a lot of damage and getting rid of that fire won’t be easy for a while.

The weak spots for the second phase are the same which are both of his arms and the leg on the left, just aim for the weak spots to deliver a stun attack.

At a certain point during the fight, Surtr will vanish quickly and perform either a fireball attack, melee attack or perform another attack so you need to be on your guard.

You can also use your bow and arrow if you are good at that.

When Surtr tries to swing his sword, he will not only attempt to hit you with the sword but also summon front fire at you so make sure to stay careful.

Make sure to stay out of melee range when you see this otherwise you will take damage.

When you are at a good distance away from him, make sure to use your bow and arrow unless you are good at melee then you use the perfect dodge to get the time slowdown and deliver that extra damage.

For the rest of the fight, keep calm, dodge his attacks and find out his attack pattern to know when to perform the next attack.

That’s it, you have successfully managed to defeat Surtr and complete the DLC!