Time to slay this toxic dragon to pieces! 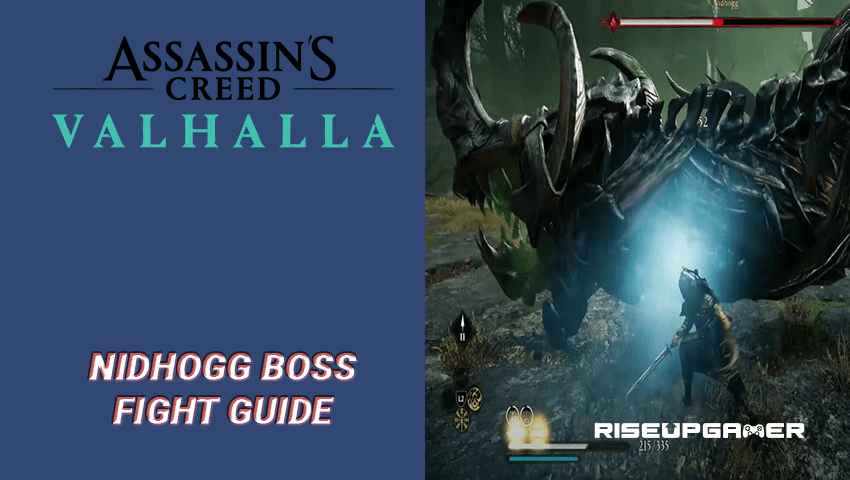 Assassin’s Creed Valhalla is an open-world RPG that follows the story of Eivor and the Raven Clan as they try to conquer the lands of England and beyond by making alliances and friends. The game has recently received an update that adds a free DLC called the Forgotten Saga with plenty of new quests and boss fights.

This guide will tell you how to defeat the dragon called Nidhogg in the game.

Before you start the fight, make sure you have the Golden Flame and Lightning Fury Abilities unlocked and upgraded to level 3.

In addition to that, you will also need the Summoned Courage ability as it will help you get revived if you die during the boss fight.

Nidhogg can be found in the Urtgadhr Rots area and once you reach there, you will notice a large empty area indicating a possible boss fight. After you enter the area, a cutscene will play and the boss fight will then begin.

Since you can only deal damage to his legs at first, you will need to use your melee weapons to reduce large chunks of his health.

Using ranged weapons isn’t recommended as they are hardly effective in boss fights like these where your enemy doesn’t have rapid movement.

As you use your melee weapon to deal damage, you need to be careful of the toxic green gas that he releases as it can reduce your health.

Another thing worth noting is that Nidhogg will constantly try to attack you with his legs and tails so be prepared to dodge them.

The dragon will also fly around from time to time to change his position and attack you so don’t try to rush forward to attack him before he lands.

Once you damage three of his legs, he will hover around in the air for a short while before falling to the ground.

He will be incapacitated for a while and you will be able to attack the glowing parts of his neck to reduce his health.

However, you need to be careful as Nidhogg will start spewing fire from his mouth to protect himself. Avoid the toxic gas and fire while attacking his neck.

This will bring his orange health bar down to half and complete phase 1 of the battle.

Now the second phase of the fight will begin and you will need to attack his legs again to reduce his health.

In this phase, Nidhogg will become very aggressive and will try to constantly move from one place to another while spewing fire and releasing toxic gas.

He also has some new tricks up his sleeve this time such as smashing his legs onto the ground to release a toxic gas that covers a wide range of areas.

The best to avoid this is to dodge and roll away from the red flashing area on the ground.

Since Nidhogg is a toxic dragon, he will also spew venomous green acid from his mouth all across the battlefield.

While you can easily avoid the toxic gas, you need to be prepared as Nidhogg will immediately rush towards your location and swing his tails and legs to attack you.

Now you need to charge ahead and attack his legs while the opportunity is ripe. Deal as much damage as possible while avoiding his attacks.

After you manage to damage three of his legs, he will fly around for a while before falling to the ground.

Beware of the toxic acid that he spews from his mouth and attack the glowing areas on his neck until the health bars get reduced to zero.

While you might think that the fight is over, suddenly his entire body will start glowing and soldiers will come from all directions rushing toward Nidhogg.

Since his health is down to half, you will need to attack all of his legs again.

After you damage three of his legs, he will hover around and then fall to the ground.

You will need to avoid the toxic gas that he spews from his mouth while attacking his neck.

In addition to that, you will need to avoid those soldiers charging toward you and keep attacking Nidhogg until his health bar gets depleted.

Once you deliver the final killing blow, Havi will keep slashing his neck till he dies and you will e rewarded with Dead Speaker Trappings outfit.

That’s it, you have successfully managed to defeat Nidhogg in the game!