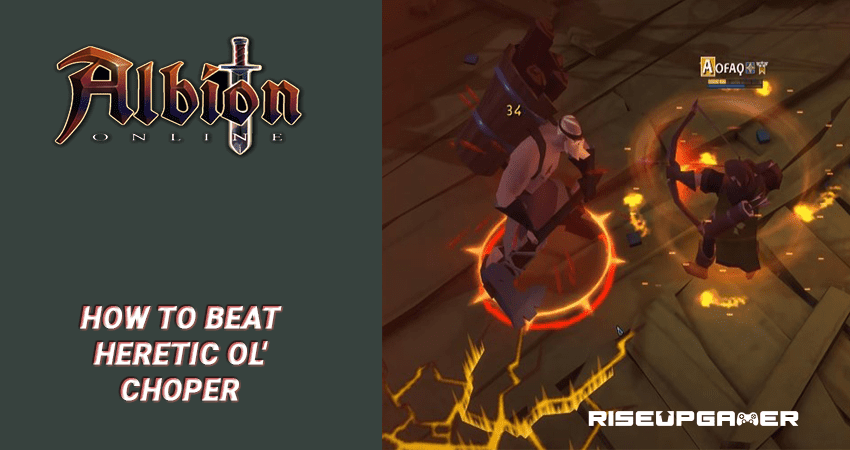 Albion Online is a free medieval fantasy MMORPG game where players can grow their wealth, forge alliances and explore the world to engage in intense PvP combat. This guide will tell you how to beat the NPC boss Heretic Ol’ Chopper in the game

The first is the melee approach where you will need to deal as much damage possible even when you are running away followed by the W ability to reduce his defensive capabilities.

You need to avoid the attacks that he projects on the ground and the best way to do it is by running straight through him. Spam your attacks while his back is facing you and once you get three stacks to maximize the effect, attack him with a blood bandit. The Blood Bandit that can be used by pressing E is often the most effective angle weapon skill with the longest cooldown.

When he performs his whirlwind attack, try to escape it by running away and using your mobility skill. Hit him with your E skill when he tries to recover and as he approaches you, perform a couple of hits to bring down his health.

Heretic will try to hit you with his auto attacks and you will need to dodge it and try to maintain some distance before the next whirlwind comes. Use your D ability to slow him down and if it doesn’t work then it’s best to run away.

When he tries to gain some stamina after performing the whirlwind, hit him with a few strikes to induce status effects such as bleeding effects. This will drastically reduce his health and Heretic will soon be defeated.

Here are some tips to deal with Heretic using a ranged approach:

1. Stay close enough to trigger him but maintain a distance to maximize the amount of time we have to feather him while he charges toward us. After you get far enough, use your W and E buffs and let those arrows fly. Avoid overhead smashes and interrupt those smaller hand smashes with your Q ability. Don’t forget to keep your distance from him.

2. When the big smash or whirlwind is inbound, try to get as much distance as possible between you and Heretic. Remember that he will only use his whirlwind attacks when he gets below a certain HP threshold. Plan ahead and be alert to save your F skill when you really need it

3. When he runs behind you with his overhead smash attack, use your mobility skills to outrun him and avoid the attacks.

4. The best time to attack him is when he tries to recover his stamina after a whirlwind attack and in this short window, you can spam a lot of arrows to reduce his health.

You will be rewarded with a measly 2000 silver for defeating the NPC boss Heretic Ol’ Chopper. That’s it, now go ahead and follow these tips to turn the tides in your favour and defeat him!