Hang tight as this guide will cover every aspect of fame farming in Albion Online! 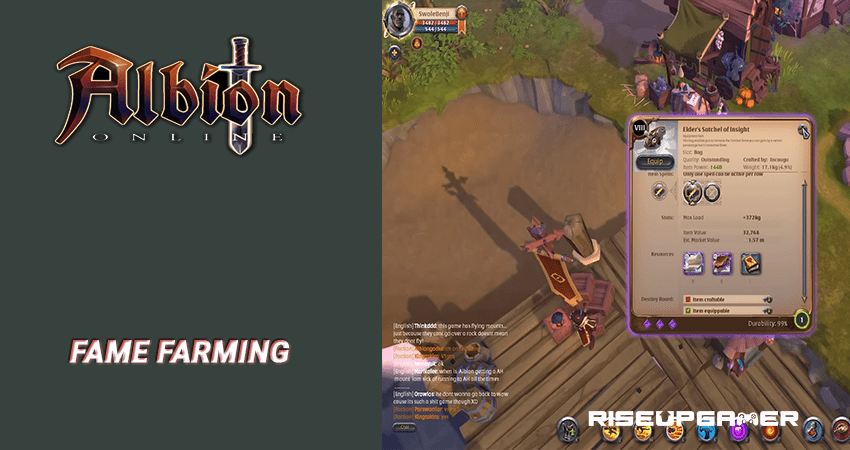 There are numerous advantages to playing Albion Online. Since it’s an MMO, it comes as no surprise that it has features that give the game additional longevity and encourage player activity. In essence, Albion Online fame system is similar to the XP system.

Even though there are many things you can do in Albion Online, Fame might be difficult to obtain. Because of this, check this guide to find out everything about Fame Farming.

Please note that this guide is strictly for a single use before we begin. Due to the bulk of Albion Online players being solo gamers, this is primarily for individuals and not groups. The player will still need a few pieces of the necessary gear and a few farming zones.

Players with less money should not use this type of farming. This is due to the difficulty of obtaining the necessary equipment, some of which is endgame gear.

If you play Albion Online frequently, we also suggest obtaining the Premium Subscription because it will facilitate Fame farming. However, it is not necessary if you do not want to buy in-game currency.

You will first require Elder’s Satchel of Insight. Although this piece of equipment is excellent for keeping gear, its buff, Combat Study, is what makes it most popular.

You will have a higher percentage chance of obtaining Combat Fame, which is the main method of obtaining Fame Farming, thanks to this buff.

Once everything is ready, you can start using the Open World Mob Farming method, which is the initial method for farming fame. It’s quite easy to do and unquestionably the finest way to gain Fame in the gameplay.

Simply fighting foes and winning battles will give you Combat Fame. You will make a lot more money than they would typically offer you if you have the Combat Study boost.

So, in order to farm Fame, you’ll be running around battling gangs. The Elder’s Thetford Cape is highly recommended because it works great for automatically fighting mobs. It possesses a Chain Lightning enhancement that becomes active when it launches a regular attack.

This indicates that when you use your normal attack, it has an effect similar to an ability that sends a bolt of lightning to all foes nearby, killing several of them at once.

You should concentrate on farming Fame in the Yellow Zones with your cape and bag. Farming in a Black Zone puts you and your equipment at great risk of being prey in the numerous eyes of other players. Instead, with the satchel bonus on, travel to the Yellow Zone and farm there.