Across The Obelisk: The Coliseum Guide

Time to complete the Coliseum and become the arena champion! 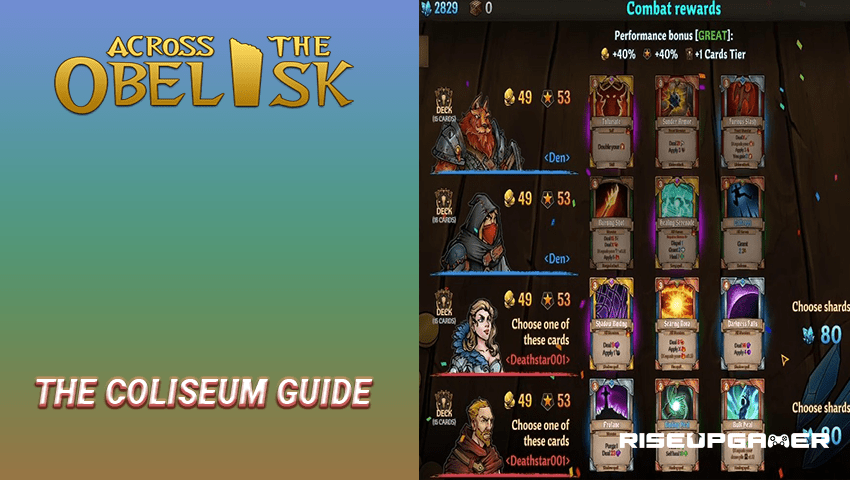 During your journey in Across the Obelisk, you will come across plenty of nodes that provide you with really cool cards, points and other rewards. The Coliseum is one such place where you will be able to farm a lot of items as long as you can fight against the enemies there.

This guide will tell you how to complete the Coliseum node.

The Coliseum Guide in Across The Obelisk

The Coliseum is a common event node located in the Velkarath Mountains which can be accessed via the red portal on the map.

There are various dialogue choices that you can select at this node. If you choose [Bet] and pass the skill check then you will be rewarded with 600 gold.

On the other hand, if you select [Combat] then you can undertake a series of fights to win and become the new champion.

The Round 1 of the fight can be seen above.

You will receive +40% gold and XP as well as item cards shown above once you manage to complete the fight.

Select any of the [Combat] options to start another fight in the arena.

During this fight, you will encounter the Fang Gang which are crocodile enemies or you can choose to fight against the Blazing Brothers who are the fire cultists.

Here are all the combat rewards that you receive for defeating your enemies.

Choose the [Combat] option to fight against the Arena Champion or select [Leave] to retire with some gold that you have earned.

Face the Arena Champion and defeat him to take his title.

Click [Continue] and you will be crowned as the new champions of the arena. As a reward for your efforts, you will receive the Arena Champion card for Magnus, Andrin, Evelyn and Reginald as well as 250 gold and 64 XP.

That’s it, you have successfully become the new champions of the arena and unlocked the Steam Achievement : Arena Champion!