Use this strategy to defeat the twins! 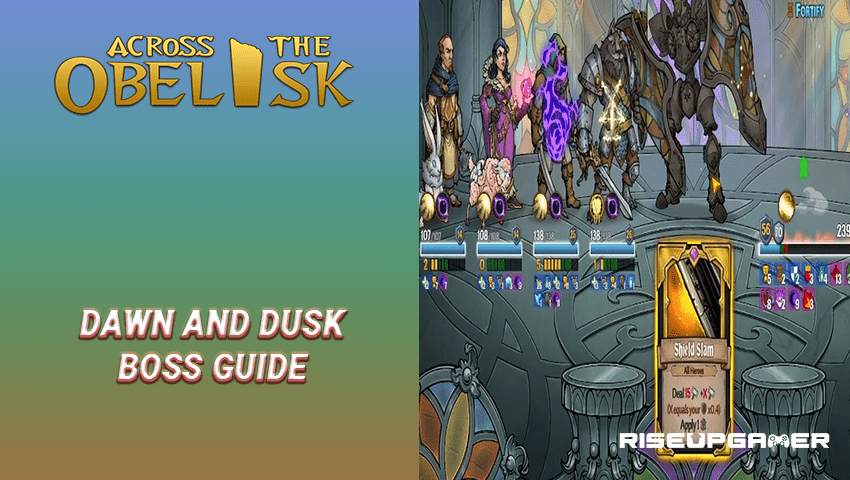 There are plenty of bosses that you will encounter during your journey in Across the Obelisk and one of them is Dawn and Dusk. These are the bosses that guard the staircase during Act 4 and they are one of the 2nd most powerful bosses in the entire game so it’s important that you follow a strategy to defeat them.

Keep reading our article to find out how to defeat Dawn and Dusk Boss in Across the Obelisk!

Dawn And Dusk Boss Guide in Across The Obelisk

In order to find them, head over to the Lower Staircase node on the map.

Select the [Combat] option to attack the twins and start the fight.

You see the stats as well as the cast cards for both twins above.

Both of them have identical decks except that they use opposite elements: dark and light.

Both of them primarily focus on defences while also using attack cards from time to time. Shield Charge and Shield Slam are their main attack cards that increase the amount of damage depending on how many blocks the bosses have left.

In order to tackle it, you will need to reduce their blocks by attacking them but unfortunately, you cannot keep spamming your attacks for long.

After the twins cast their dark or light punishment cards, you will need to stop your attacks as they will start deflecting back to you and deal damage. This will last for about a turn and they will take turns in inflicting damage so you need to make sure that you focus your attack on the boss who doesn’t have the enchantment.

In addition to that, they also have 2 enchantment cards that you cannot get rid of called the law of darkness or light. It will activate each time you play a card and add a buff or debuff to your boss hero.

So the best way to deal with it is to either stack your curses like bleed, burn and poison. These curses will inflict damage over time to slowly kill them. Apart from that, you can also use your skills that ignore or destroy blocks to deal damage directly to their health.

Once you manage to defeat them, you will receive the following combat rewards with 20% gold and a 20% XP increase.

The following item rewards which are the equipment that bosses usually drop after the fight can be collected once you defeat the twins. These include the Lightbringer, Powercoil and Ying Yang badges.

That’s it, you have successfully defeated Dusk and Dawn in the game!