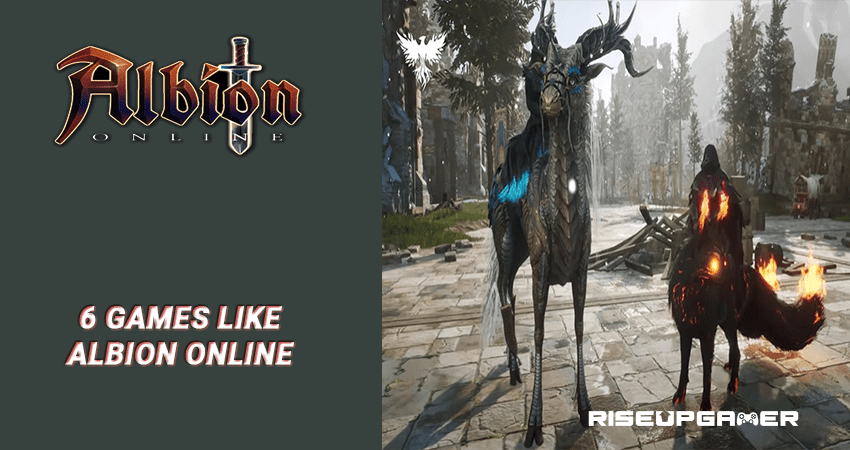 Albion Online is a medieval fantasy sandbox MMORPG where players have complete freedom to pick what they want and who they want to be in the game. There are a lot of PVE and PVP activities, with a very strong player population which means you will always have someone to play with. If Albion Online is your favorite game, you can explore 6 more pretty similar games and enjoy the same experience as Albion.

This guide will show you 6 Games Like Albion Online.

Skyforge is a free-to-play massively multiplayer online role-playing game where players assume the role of an immortal with incredible celestial powers who must protect the planet Aelion from invaders who threaten the world and its population.

Character progression within the game is a traditional leveling format. The game features a prestige system, which allows a player to advance based on the sum total of their stats and progression.

Once the character becomes a god an additional progression system will be featured which allows players to increase their character’s power.

Aelion has a lot of missions to take on and huge map to explore. The planet has three core areas which includes The Divine Observatory, where players gain access to a hologram sphere that allows them to travel to different places across the planet.

This game is available on Nintendo Switch, Xbox One, PS4/5, and Windows.

Aion is a massively multiplayer online role-playing game that combines PvP and PvE in its fantastical world. The gameplay of Aion revolves around battles within the Abyss and Balaurea. Within these zones are fortresses that can be controlled by individual Legions.

Participation in PvP is rewarded with Abyss Points in the game. Players are getting ranked as they won battles against fellow players based on their participation in the Abyss and Balaurea.

Certain items can be purchased with these points such as high-end armor and weapons. This is referred to as the Abyss Rank system, and there can only be a limited number of high-ranking players per server.

Ashes of Creation is a massively multiplayer online game. The developers are describing the genre as a build your own adventure-type game, where the player activity dictates how the world changes. Each server has its own economy, rate of growth and story.

There are four stages of the development process. The first is the Nodes System, which is how the world interacts with the players. Second is PVP, which includes battlegrounds, guild wars, a PVE/PVP flagging system and how players can catalyze change in the environment.

The third stage is the economic system. It has a regional set marketplace that caravans can travel to, to trade goods they have gathered or created.

The fourth stage is the story that is in three main ways, Tasks, Events, and Narrative, with the narrative being the primary.

Fractured Online is a dynamic open-world sandbox MMORPG, where player defines their own destiny. The unique knowledge and talent system allows skills to be discovered, learned and mastered quickly, providing new and core players with a unique experience right from the start. With the action beginning from the first day, enemies are defeated through skill and cleverness, with no equipment or level.

No set paths mean limitless adventure where you can decide whether you explore the vast, interactive fantasy worlds, fight monsters and other players in dynamic PvE and PvP battles, gather resources, craft and enchant unique items, setup a trade empire, or gro your virtual home into a prosperous city by cooperating with other settlements or conquering them.

The major difference between this game and Albion Online is that Fractured requires players to pick between one of three different races: Beastman, Human or Demon. These races define which society players will be and interact with.

This is a Korean fantasy martial arts massively multiplayer online role-playing game. Blade and Soul features a combination of martial arts–inspired combat and qinggong in an open-world environment. Players create characters that explore around the world by completing quests assigned by various NPCs.

The game uses a real-time battle system in the third-person camera view and requires players to combo a series of attacks, much like that of fighting games.

Blade and Soul provides a highly customizable system and NPCs in the game are made with the character customization system.

Customization a player has access to include hairstyle, facial structures, facial markings and makeup, eye color, height, and body sliders.

This is a free-to-play massively multiplayer online role-playing game. Revelation Online is set in the fantasy world of Nuanor, with its world, characters, and concepts being influenced by Chinese mythology and folklore.

Revelation Online starts in an open world and features over 100 hours of story content, raids, and dungeons. Players can use the power of fight to explore and travel, with aerial combat available once players reach a certain level.

There are several classes available including the Assassin, Gunslinger, Spiritshaper, Vanguard, and Swordmage. Players can participate in PvP battles, guild battles, and team up to complete quests or enter into relationships.