10 Minutes till Dawn: How to Burn Everything

Check out this guide to burn your enemies to death in 10 Minutes till Dawn! 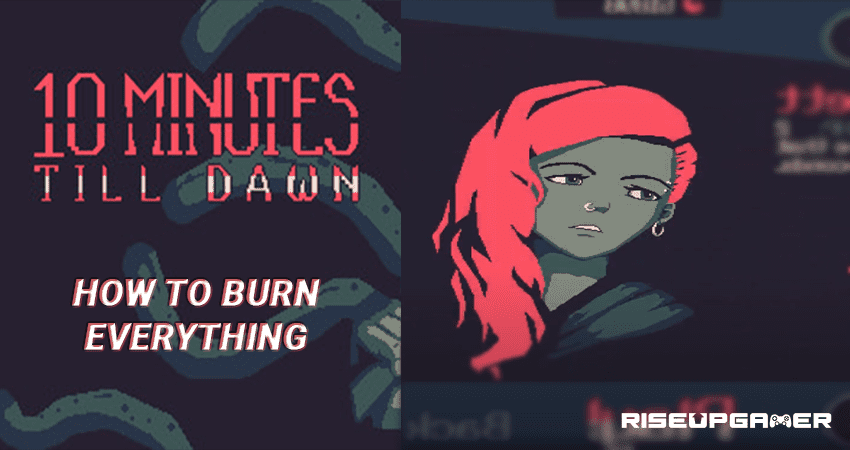 10 Minutes till Dawn is an Indie title where you need to survive against hordes of monsters for a duration of 10 minutes. In this guide, we will tell you how to burn everything in the game.

10 Minutes till Dawn: How to Burn Everything

In order to burn your enemies to ashes, you will need to create a big fire burn build by choosing the character Scarlett with the Flame Cannon as they can create lots of burn damage.

The number one priority for this build won’t be adding burn damage but getting the PowerShot so we can obtain the Splinter to start propagating burns whenever something dies.

You can consider picking upgrades like Double Shot if you are not getting upgrades that can do burn damage to your enemies.

However, the priority should be to choose Splinter Shots and Rubber Bullets whenever you get a chance to select them. Rubber Bullets can help you bounce those bullets while increasing the fire rate of your weapon.

Upgrades like Fan Fire can also be helpful as they allow you to shoot 10 additional bullets in a circle while using your last ammo to deal 15% more damage to enemies.

You can also opt for a Fusillade which can reduce the bullet damage but increase the spread and projectile of the weapon.

Burn upgrades like Pyro Mage or Intense Burn or Soothing Warm are also good options they enhance your bullets by giving them a 50% chance of inflicting burn for 3 damage per second.

Once you get your hands on the Power Shot, you will notice a major improvement as you will be able to clear enemies more easily instead of running around and trying to avoid them.

You will need an upgrade to heal yourself as the shield won’t be able to hold up in the later parts of the game. Getting your hands on the Splinter upgrade should be your topmost priority as it can explode enemies into 3 bullets when killed and these bullets can deal 10% damage.

You will be able to clear enemies way faster since Splinter is a key part of the burn build. Fire Starter can also be a good choice later as it can launch a fireball on your every 4th shot dealing 40 damage.

It can also inflict burn damage on enemies in a large area for 3 DPS allowing to clear hordes of enemies surrounding you easily.

That’s it, now go ahead and follow these instructions to use burn your enemies to ashes in 10 Minutes till Dawn!